I’m not a particularly angry person. Yes, I get exercised when the stupid are given platforms from which to demonstrate just exactly how very stupid they are, but that’s more despair than anger. In the main, I sail on through my unremarkable life trying really hard to not be a burden on others. I expect nothing, so I rarely get disappointed when nothing turns out to be exactly what the world dishes out. When all the big promises turn out to be empty these days, why do so many set such great store by them? Why is everybody [else] so helpless?

So, not angry, nor hateful, although I will put my hand up to being a bit of a curmudgeon. I’ve been trying to place my finger on quite when that happened. When did this optimistic young lad of the mid-twentieth century, setting out to explore a world of exciting possibilities turn into an old duffer, harbouring a low, seething antipathy towards almost everything that identifies the Britain I feel less and less connected to each day?

I watched the first part of the BBC documentary ‘Cold War, Hot Jets’ the other night; a fascinating celebration of the world I was born into. Stirring stuff, straight from the pages of Boy’s Own Paper and that curious homonym (Boyzone) made me wonder: do today’s young lads want to grow into men, explore the world, fly fast jets and serve their country, or do they just want to be groomed by manipulative Cowells and garner instant fame and fortune for five minutes? Go out in a blaze of guts and glory shooting for the stars, or have your own star snuffed out by the fickle flame of celebrity?

A Royal Air Force ten times the size of today’s. An actual fleet of huge, ocean-going warships. An army still capable of taking on anybody, anywhere. And we’d not long emerged from the last world war. As small boys we would parade round the school yard, arms over each other’s shoulders, proudly singing “We won the war, in nineteen forty-four!” over and over again. It was close enough; it rhymed and we were kids… and schools had yet to commence the re-positioning of impressionable heads with regard to ante bellum politics. Goodies and baddies: it worked well enough to instil a morality seemingly absent today.

I think that’s where it started to end. The Empire was already gone, of course; there was still pride in what we had achieved over the previous two-hundred years, but the new, progressive generation wanted none of it. As they sought to distance themselves from the horrors of a war they had no hand in fighting, a new rhetoric was developed and national pride was rebadged as ‘nationalism’ and deemed reprehensible. Most of my life, therefore, I have felt out of step, with one foot in the majesty of the past and one in the mediocrity of the here and now.

Predicated on lies around the concepts of equality and collectivism, the touchy-feely world of caring by diktat has allowed people to abrogate their personal responsibilities towards one another and rely not on this band of brothers but on an increasingly all-powerful state to bind society together. And it hasn’t worked, has it? Next year will be the one hundredth anniversary of the outbreak of The Great War, but whoever put the cult in multiculturalism will gleefully point out that what was never achieved by war in a thousand years has been done by stealth as the zealots applaud the smothering of our own culture and the minoritisation of our own ethnicity in our own major cities. 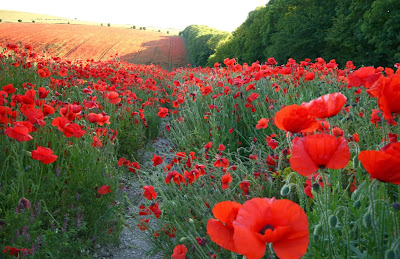 But on Remembrance Sunday and today, the Eleventh Day, days on which I can scarcely breathe for the catch in my throat that every word, every note of the last post and every second of the two-minute silence brings, I am proud to be an Englishman and damned proud of our long and yes, noble past. And part of that hard-won British character is the tolerance of fools who would see us condemned to the backwaters of history. I’m talking to the likes of you, Anjem Choudary. Today, this one day of the year when Britons dare to celebrate being British, I have only one thing to say to those who come here, drink deep from our generosity then reward it with hatred. If you don’t like it, just fuck off.