Now that the election campaign proper is under way the gloves are well and truly off, but both sides seem to be flailing about shadow-boxing; swinging at jinking opponents and hardly landing so much as a well-aimed but flimsy fact, with neither side persuading the crowd to cheer them on with any conviction. Meantime, over in France the enormous popularity of Marine le Pen’s Front National is hidden behind their convoluted voting system which allows the minor parties to gang up and relegate the party with the second biggest share of the votes off the table. But all these political willy-waggling gestures merely serve to bury a little-reported EU travesty of enormous import for us all.

Known as L’administration Aggrégation Fiscâle, Brussels has been quietly working on doing to everybody what they did to Cyprus not so long ago; a raid on bank accounts. But unlike the Cypriot harvesting of major chunks of individual capital the intention – indeed it is already a fact in France – is to systematically cream off a small sum per month from every single personal bank account with more than around €2000 deposited, active or not. The modus operandi of AF, as it is referred to, is to extract from the unwitting participants sums small enough to appear as rounding errors and certainly within the value of most current accounts’ paltry interest receipts.

But small though the individual sums are – in the UK it will be barely £1 per person per month on average – all those pennies add up to a considerable sum, which will bypass the UK Treasury altogether and go directly to the EU’s Central Bank. It is estimated that the sums raised from raiding UK accounts alone will amount to around £98,000,000 per annum. Given that the EU’s accounts haven’t been properly audited and signed off in near two decades, who would hold out any hope that this pernicious and underhand measure will be used in any way to further the common good? 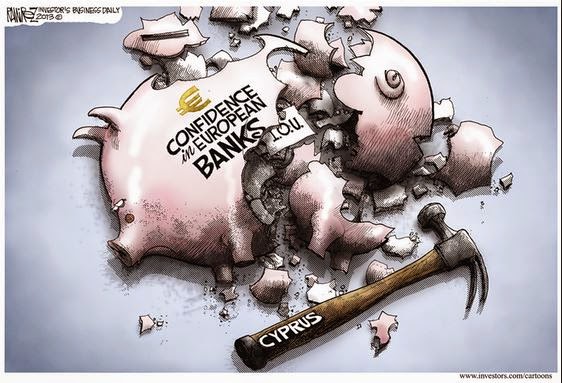 The details are hard to find without a good deal of searching and all references are very carefully worded to sound innocuous, but to find out just how many pee has been extracted from you without your consent and how you can possibly opt out of the raid, you can find out here: What AF means to you. Please spread the word and let us see if we can put an end to this secret Euro-tax.

PS :12:01 April 1st 2015: This was a partly political broadcast brought to you by the words April and Fool and the numbers some-of-the-people-all-of-the-time. It seems to have worked well enough - hope you enjoyed it.

...but how certain are you that such a move HASN'T been put in train?
Posted by Batsby at 05:43