The Election that never was...

Scouring the media, as I do, to find something to bang on about I have to say I’m finding the election build up a tad disappointing. This is supposed to be the most important election in the lives of almost everybody paying tax in Britain; a feast of Last Supper significance and yet the fare is dull and lifeless. Despite both Cameron and Miliband suddenly having caffeine injections responding, no doubt, to some advisors responding, probably, to some focus groups responding, I expect, to some polls, which seem to be more to do with influencing than sampling, there is no real buzz. We were warned of this impending election fatigue when the campaigns started back in 2010, but thought we’d stay the course.

But, be honest, the long-term economic plan versus the million-council houses pledge; the safe hands versus the magic money business; the right wing lies versus the left wing lies; it’s just the same old shit served up gently steaming. What we want is a broiling cauldron, bubbling over with spice and substance. What we’ve got is pease pudding cold… nine days old. As neither of the two main rivals has any room for manoeuvre it is now all down to the dirty old tricks of scare tactics and smear... and forever responding to what paid hirelings tell them the voters want to hear.

What happened to leading? What happened to showing us the way forward, to giving us a real hope for change? But no, it's still: The Tories will eat your young and Labour will plunge them further into debt; either way, according to respective received wisdoms the next generation is screwed. The core vote is solid and unwavering and short of the human masks slipping and our lizard overlords accidentally revealing their green scales live on the telly, nothing will change that.

So instead we are relying on the smaller parties to turn the tide and bring in the vote from the formerly voluntarily disenfranchised. Let us just take a moment to think about that… Oh my gawd, I need to lie down. It’s going to be a complete clusterfuck whatever combination rocks into Number Ten, isn’t it? They say that if you don’t vote you get the government you deserve; this time it seems that whoever you vote for you will not get the government you want. Opt for Labour and you will end up being dictated to by the communists of the Scots Nats. Go Tory and there is a chance of an unholy ConLibDupKip smorgasbord of Gordian knottiness. Either way the EU wins. 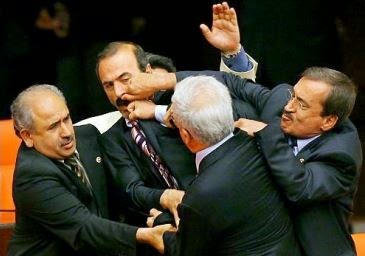 Now THAT's what I call politics!

What I do foresee is a rash of leadership challenges in the immediate aftermath of this imminent failure of representative democracy. Campaign chiefs’ heads will roll and the stalking horses will stampede, trampling all in their wake. Boris will set up his circus stall, Chuka will make his slithery move and Natalie Bennett will disappear forever - gone back to the wild. Probably the only party leader to hold her head up high will be wee Eck’s wee Eck, by heck. Maybe it’s because I already voted by post, but it feels like this doomed election is already over for me; it’s all done bar the fighting… seconds away.
Posted by Batsby at 04:52