In 1955 Cyril Northcote Parkinson observed that work expands to fill the time allotted for its completion. Actually, he observed this some years before, but being a busy man it took him a while and he only actually finally (and ironically) wrote it down as the publisher’s deadline approached. Just as well he did because otherwise the world would have been deprived of Parkinson’s Law. Without these eponymous laws to guide us, negotiating this mortal veil would be a far more perilous journey. Thanks to such visionaries as Boyle, Hooke and Ohm and solid thinkers such as Parkinson, Murphy* and Sod we understand our world so much more clearly than did our forefathers.

Everybody knows from experience the inevitability of Parkinson’s, whereby your kids never start their homework until the day before it needs to be handed in and how when you start to catch up on your Sky-Plus listing suddenly you find you’ve been sitting on your arse all day. But old Parkie goes further than this simple principle and also notes such pithy realities as: “The time spent on any item of the agenda will be in inverse proportion to the sum involved” and ‘Orgmanship’ which is "The tendency of all administrative departments to increase the number of subordinate staff, 'irrespective of the amount of work (if any) to be done."

These statements practically amount to mission statements for all government departments, the NHS and any organisation given any public funding for any purpose whatsoever. Panels of ‘climate experts’, economic think tanks and the administration of the BBC all spring to mind as exemplars. But even in the lowliest collection of human work units there is still room to see the machinations of these universal laws in action. One such law is the Peter Principle, in which the selection of a candidate for a position is based on the candidate's performance in their current role, rather than whether they possess any abilities relevant to the intended role. Thus, employees only stop being promoted once they can no longer perform effectively, and hence "managers rise to the level of their incompetence." 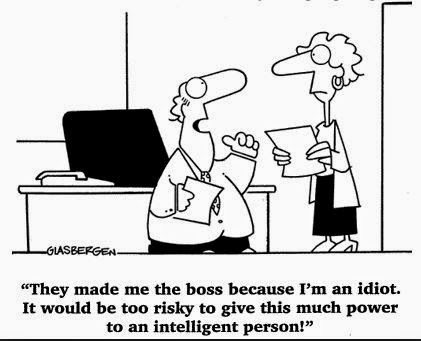 We all know at least one such co-worker, floundering around, doing more harm than good and often unaware of the chaos they leave in their wake. I sometimes think that a quiet cull might be in order but generally it is kinder to just let them do their thing, keep them out of harm’s way and give them an office in a quiet corner of the premises where they can do as little harm and generate as little expense as possible. Of course, this doesn’t always work; sometimes we have to promote them all the way out of trouble, elevating them to a position where they become entirely irrelevant. I’m calling this the Prime Minister Principle.

(* Murphy’s Law states, of course, “Anything that can go wrong will go wrong” but blog authors may be more familiar with its editorial counterpart:
Muphry's law – "If you write anything criticizing editing or proofreading, there will be a fault of some kind in what you have written.")
Posted by Batsby at 05:34