Recidivism, definition : a tendency to relapse into a previous condition or mode of behaviour; especially relapse into criminal behaviour. How refreshing then, you might think, that a more or less guaranteed recidivist recognises his weakness and has asked to remain in prison where he is getting some treatment for his addictions. There has been some debate about whether prison is the best place to facilitate his rehabilitation, or whether we can afford it, but the alternative – releasing him – is almost certain to end in his own prediction that he will return to criminal means to fuel his drug habit. But what’s a caring society to do?

Meanwhile Brian May tweets about food banks and the NASUWT Conference regales its members with tales of Dickensian squalor, as illustrated by anecdotes of unfed, raggedy children arriving in school. The cry, as always, is that we must do more, spend more to save the children the addicts, the sick, the stupid and those incapable of healing themselves. The mark of a civilised society, they tell us, is how it cares for its most vulnerable. But is colluding with that ‘vulnerable’ sector of society to increase the numbers who rely on state intervention an entirely intelligent response to the problems that same expanding sector creates?

Has it ever occurred to those who use feeble, touchy-feely aphorisms about how we treat those specimens (who would be referred to as parasites in any objective analysis) that rewarding aberrant behaviour is always going to end badly? We enforce the ‘human rights’ of clearly unfit degenerates to procreate, then - when they abandon their offspring to a life of care, delinquency, addiction, criminality and prison – throw ever more, increasingly scarce resources at the problem of containing them. We can’t create prisons, hospitals, rehab centres, probation services, hospital, schools, court and social services fast enough to cope as the uneducated and uncivilised underclasses outbreed those who have to pay for them.

And how do those who rely on the misplaced charity of a society afraid to confront cold, hard reality repay those who do pay for it all? With scorn, contempt and a sneering declaration of their entitlement to do whatever they wish. The only people who get to do as they like are the comfortably rich and the comfortably unemployable. But at least the rich pay their own way, while the ‘new poor’ have become some sort of sacred cow, to be appeased but never curbed. Give somebody something for nothing and they will value it exactly as much as it costs them. 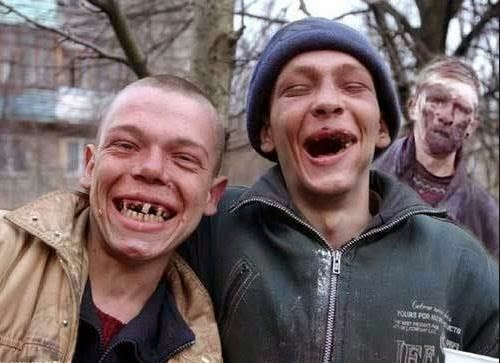 The future Prime Minister and Chancellor greet the nation.

At some point, however, we will have to face up to the fact that curbs and sanctions will need to be deployed. Curb? What am I saying; there is another four-letter word beginning with ‘c’ that is far more apt under the circumstances. The only certainty is that unless we do something drastic soon we will eventually become too stupid a society to even contemplate it. Already several generations of teachers, social workers, lawyers, policemen, politicians and a whole plethora of various ‘rights’ campaigners have grown to depend for their living on the continuation of this impossible model. A truly caring society should wage a committed war on want and reduce to a minimum those who live appalling lives. Time for a cull.
Posted by Batsby at 05:27