You will own nothing and you will be happy? This World Economic Forum ‘threat’ sounds at first take alarming but think about it for a moment. Were it actually possible it sounds like quite a good idea. No, really; everybody has a place to live, in which they are happy. The heat stays on, there is plenty of food and the roof gets fixed when it needs to be fixed. And although it doesn’t belong to them, neither do the headaches associated with ownership. And they will be happy. What’s not to like?

I’m assuming that in return we all put in a fair day’s work at which travail we are suited and content, thus being occupied in work which we if not enjoy at least endure reasonably well. And presumably, if we are going to be happy, maybe the more mundane duties are filled by the young and fit, but not arduously so. Bin men and ditch diggers maybe only have to put in half the hours of labour that a solicitor or an accountant need perform. And those of an artistic bent are free to indulge their passion for as many waking hours as they feel the urge.

In order to be happy, of course, one has to feel that life is worthwhile, so presumably universal, cradle-to-grave healthcare is free to all, as is unlimited opportunity to indulge in suitable leisure activities. Also, I would expect, life-enhancing ventures such as travel and sport, music and theatre… and picnics, I guess? But even as I write this I am wondering about how horribly uniform we would have to become for any of this to function.

A contentedness with our lot is something vouchsafed to relatively few of us, and a feeling that others are getting more than they deserve seems to be woven into the very thread of our DNA. Those with children will take more out of the system than those with none, or will we all be compelled to breed to a certain minimum? And there will always be slackers, of course. How do we incentivise everybody to give equally of their time and talents?

And also, in order to provide for all this, your local leisure centre is going to have to be utilitarian – more council gym than David Lloyd.  Your theatres more school hall than West End. Your restaurants more Wimpy than Ivy. Your cars more Trabant than Tesla, perhaps. The holiday resorts would necessarily be more Benidorm than the Algarve, but it would be free, see? And you will be happy. Now I come to think of it, it sounds terrible. In fact it sounds a lot like Communism in its strictest forms.

Klaus Schwab’s grand dream is just that. And yes, he has influence and yes, he has acolytes and yes indeed he may even, as Common Purpose and other left-thinking organisations have, inserted his ‘young leaders’ into governing institutions. But they have been doing this sort of thing for a great many years. The royal courts, and religion before that, all have sought to impose their grand vision on mankind and few have resulted in glorious redemption. And it’s all because of you. 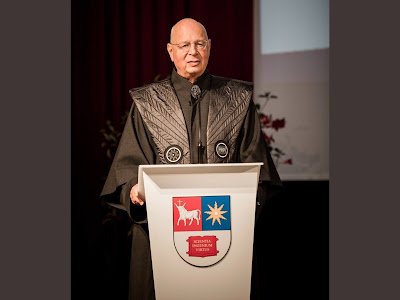 Come over to the dark side, Luke...

Yes, you, you ungrateful animals who would bite the hand that feeds you. Of course, if having a belief in a grand conspiracy to enslave us all is important to your life view, who am I to deny you? Some people need a bit of doom to cling to, even in the best of times, so why not indulge in some exciting domination fantasy while times are grim? But as things stand I’m not holding my breath for Schwabby and his Dr Evil chums. Humanity is a work in progress and I don’t fear a new world order… I’d just like to see the old one sorted first.