In the middle of the twentieth century the word ‘woke’ was synonymous with ‘getting it’; being aware of the ways of the world, especially in relation to black Americans being ‘woke’ to the prevalence of racial prejudice. This form appears to have first been inspired by Marcus Garvey when he exhorted “Wake up, Africa!” and went on to influence movements like Black Power. Typically, today, the word has been taken up by the usual white saviours – they just can’t leave things alone, can they?

To the woke, woke means: 'aware of and actively attentive to important facts and issues, especially issues of racial and social justice'. How could anybody be against that? How? Well because the fields of racial and social justice are rotten through with theorists who cling to the doctrine of Critical Race Theory, a politically motivated attempt to make white westerners ashamed of their own existence. To the woke, anybody coming under the catch-all title of ‘anti-woke’ is a thuggish racist and extreme far-right bigot, and there they end their intellectual inquiry. Ain’t nobody woke don’t know dat.

The assumption that anybody who rejects the political reframing of our history, the replacement of actual events with confected accounts of the malign intent behind every single event, is an uneducated blackshirt would be risible, were it not soaked up so readily by the impressionable minds it is deliberately intended to influence. The young, the different, those who have no comprehension of or engagement with the realpolitik. Anybody confused with or at odds with the world can embrace this almost religious fervour, declare themselves woke and thus give themselves a moral boost without engaging in any of the problematic process of thinking it through

Once converted, these self-declared intellectual superiors are quite the worst at recognising the cognitive bias of their own thesis. They are immune to reason and paint over everything with a varnish of racial disinformation; lapping up every morsel of indignation, every sleight, every raised eyebrow, and in the process of digesting all this, churn out ever more atomised ways of perceiving injustice. And any attempt to counter their arguments is seen as ‘reactionary’ and backward. They see nothing wrong in their smug self-righteousness.

Whereas, what we see is the world we live in portrayed very differently on screen – the overwhelmingly mixed race couples in adverts, the white male as neanderthal throwback, the endless ranks of BAME commentators, listened to in reverence. Every aspect of our lives is now judged on ‘diversity’, which almost always means no safe space for white people, especially those with English as a first language. We are the white oppressor, and we must accept this without question.

Maybe this is all deliberate, to give us supposedly privileged white folk a taste of our own medicine; to make it impossible for us to rationally question the narrative. And whenever the more outspoken, the more intellectually rigorous among us dares to speak out, they are portrayed as rabble rousing, club wielding Nazis. So, not only are we to accept all the blame and make obeisance to the new black princes, we have no right to reply, or to point out how possibly noble objectives have been appropriated to cause harm. 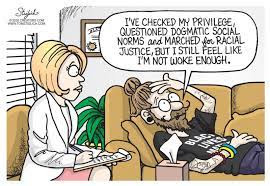 Some of the more vociferous spokespeople for various black lives organisations seriously call for the total eradication of ‘the white race’ and expect no censure for doing so. Yet any protest is loudly shouted down and the regular cancelling of sports people, comedians, writers, scientists, politicians and anybody who dares to speak out with reason and fairness is testament to which side is really the oppressor. It seems to me that any neutral observer must see that the anti-woke reaction is an entirely rational response to a dogma which is out of control.