Only Fools and Politics

In a time when nothing you hear is necessarily true, when all of what you see is suspect and eye-witness accounts depend so much on the ideology of the witness, how do you tell fact from fiction. (I just accidentally typed ‘fuction’; I think it’s a better word.) I mean, did you ever read a newspaper article which was wholly accurate? Or to be more specific, have you ever read a news item written about something on which you are something of an authority and realised that the writer hasn’t the first clue about the subject?

Our media world is full to the gunwales with reporters, wannabe reporters, commentators and so-called ‘influencers’ who care not one jot about accuracy, just so long as they can get their name out there. The report that the US government is (and who can say if this is true or not?) briefing TikTok ‘stars’ on the situation in Ukraine is just one more step along the way to the Orwellian singularity in which the truth is whatever people say it is.

The propaganda wars waged between east and west is just an upscale version of the information wars that have been pressed by governments and oppositions on their populations for many years. The future is bright, the future is shiny. “Jam tomorrow!” cries the party of government. “Lies, all lies!” say the opposition. And then, they swap places, leaving the scripts in place for their opposite numbers.

Given the unknowability of the future, this pantomime is a safe charade, for who can say that had the current opposition been in charge things would have been different? And a catastrophic decision made today is in no way an impediment to ennoblement tomorrow. In this rarefied world our actors in leadership find themselves sucked up by the undertow and swept along into the maelstrom of misinformation. I genuinely believe that those ‘in the know’ are simply in the thrall of different ‘facts’.

How else can you explain how the deafening roar of the usurped electorate goes unheard against the quiet whisper of the Mandelsons, the poison drip of the Grieves, the persistent murmur of the Westminster echo chambers? “British jobs for British workers!” pipes the election clarion, yet in government this becomes permission to open up the floodgates to all who wish to gorge on our largesse. And it matters not which party because as you look from Labour to Tory, from Tory to Labour, you could be forgiven for imagining they are all from the same porcine species.

It is little wonder, then, that so many have turned away from the news, regarding papers, podcasts, panel discussions and the like as mere entertainment. The truth matters little when the prospect of one commentator ‘owning’ another is so much more amusing. Even words like ‘owning’ have become the stuff of headline writers, hyperbole to sell a dreary exchange which results in no outcome of note. 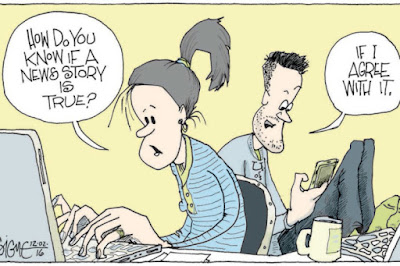 In fact, the news has become little more than a sitcom. An episodic series of pratfalls, mishaps and misadventures in which Del Boy learns nothing, Rodney is still a plonker and Trigger hasn’t a clue what just happened. The news has no real effect on us any more, it is just the wallpaper, the background to our dreary lives, scrawled with the pattern of the day, and it only exists to give us a moment’s vicarious glee at the misfortune of others. When nothing is real it doesn’t matter how daft the plot, and if one punchline fails to land don’t worry, there’s one born every minute.