News of the World

The last half  century has been pretty much downhill for democracy. As a child I was regularly made aware that we were living in a ‘free country’ with little notion of what that meant, having never known any other. English born we knew we were part of a great tradition of fighting against despotism and tyranny and throwing off first our own yokes and then those of the oppressed people of Europe. Twice. We had the vote, it was the swinging sixties and nothing was going to stop us; we were backing Britain, the greatest nation on what we knew of Earth.

The seventies brought their own tribulations, but a sense of indignation at the power-drunk unions drove us to exercise our democratic rights to vote against such over-arching control. And by the end of that troublesome decade the optimism had returned, at least for those of us who were educated, agile and mobile. Sure the mill towns and pit towns were in decline and the stench of de-industrialisation hung in the northern city air, but we were encouraged by the future that beckoned.

Closing our dark, satanic mills would benefit us all, we were told; let the free market reign and move all that toil and sweat and smoke and lung disease elsewhere. This way we could buy our precious ‘consumer goods’ for increasingly low prices and enjoy the leisure time freed up for us by clever politicians and clever business leaders. Relax, buy property, invest, let the money make money. In time, nobody would need to graft because the good times were just around the corner. The global economy was a force of nature, and a force for good, we were told. And so what if you didn’t, or couldn’t work? The system had the capacity to provide

But there was something wrong, something indecent about importing brown people to drive the buses and staff the corner shops, while the industrious little yellow people from far away made our toys and TVs and our takeaways. We stopped making things and instead let others make them in distant, sunny lands, which is where our money also went. There was no longer a feeling of proud nationhood, of belonging, but instead a note of desperation began to creep in as we moved into the new century increasingly detached from how our country worked.

Because globalisation, just like any other system, might work if it was part of a mix, if it was controlled and ordered by those who depend on it. Except it is not controlled at all and it is ordered, or rather ordained, by people who think they know far better than we how our lives should be lived. This is how we live now, unsure of who controls what, who owns what and from whom we should take direction. The globalists are not in control but are instead the acolytes of forces they have unleashed over which nobody has true dominion.

But it is fine, they say, the rule of law will ensure fairness. Oh, really? Did you see what P&O just did? In a move which has astonished and rightly enraged even free-marketeers, they have torn up contracts and made staff redundant. Redundant? Only by redefining that very word can you sack somebody and immediately replace them with cheap agency staff in those allegedly ‘redundant’ roles. You would think there would be some international law being broken here – I mean the Human Rights lot object even to people being misgendered these days – but the lawyers appear eerily silent. P&O did it simply because they can.

The influencers, the clever finance people, the globalists have created a storm they think they can weather, but for how long? Opening the Pandora’s box of blameless money, of guilt-free exploitation of resources and people, is an act that simply cannot go without consequences. The world of imaginary wealth, where somebody can almost literally think themselves rich, has to end somewhere. When all the little people propping up the pyramid have no option but to leave, where does that leave the globalists? 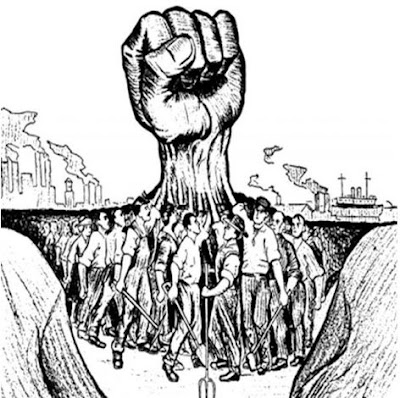 What happened to all this?
Some say restorative justice is the way; let perpetrator and victim meet and talk it out. But others, will settle for nothing less than revenge. The stolen, squandered wealth may not be able to be restored, but this doesn’t mean that reparation is impossible. Let the oligarchs, the mandarins, the money-grubbing industrialists and the exploiters of the workers tremble in fear for the rest of their days. Because when people without any power get angry – and they are as mad as hell right now – they have no other recourse than to violence. It’s coming; you just know it is.
Posted by Batsby at 08:53