Some genius thought that it would be a good idea for local government employees to tweet throughout the day, describing their functions and successes under the #ourday hashtag. For a glimpse into the surreal world of people who believe meetings are an end in themselves I suggest you take a look. Here’s a taste of a few I saw:

Of course, Twitter is the perfect place for an ambush, so along with the earnest and the self-congratulatory came the finely honed wit of some of Twitters finest:

“10am cup of coffee time. Only allowed Nescafe Gold blend cos of that austerity. FML. :o( Evil tory toffs. #ourday”

“Yippee! @LewishamCouncil have just elected a Young Mayor; he'll be able to waste up to 30k a year. Not as bad as Senior Mayor. #ourday”

“Council wasters getting upset about hijacking of #ourday tag. Well stop tweeting and do the bastard job I pay you to do.”

Howdy pardners. Well yesterday was a humdinger for these parts sure’n’all. Busiest day we’ve had for years and mighty fine for all that. See, me an’ the Sher’ff we moseyed on down to the bar and grill to get our cawfee before callin’ in at the courthouse to counsel a few lonely prisoners. It don’t seem right, somehow, them bein’ behind bars, denied their liberty, when ornery folk are not bein’ likewise o-pressed.

We done okay, here in Deadwood, but there’s always more to be done; we needs to git ourselves some good, strong diversity and equality machinery in the justice department and sort out this berg for good. There’s always a danger we could slip back into the old, frontier-town ways and that’s where we need to be vigilante to keep the peace and maintain har-mon-ee, y’all.

Yes sirree, once upon a time this was a rough and ready town. These lawless streets were home to vagabonds and wasters and drunks and jest ‘bout anybody could do jest ‘bout any thang they dang well wanted. Days was you couldn’t move but there’d be a gunfight, or a saloon bar brawl… or a lynch mob bayin’ at the jailhouse for the Sher’ff to give up some gunpoke or some injun for a bit of rough street justice.

Course, this made plenty of work for deputies and posse members - and later for carpenters and grave diggers and undertakers. Then the bars would mop up the mobs, making work for bartenders and whores… and in time, the docs. Why, in those days, the wives stayed at home cooking and cleaning and keeping house and jest about keepin’ pace with replacing the population lost to those wild old times.

But then we got educated. There ain’t much call for gunslinging hereabouts these days and most young guys don’t really want to do the job. Instead of leaving school they stay on, get soft, then alls they’re good fer is pushing paper. Not that I’m sayin’ that ain’t real work y’hear. The lord knows there’s a lot of paper to push and it ain’t gonna push itself; ever’thang gotta be filled out in triplicate, in eighteen languages. 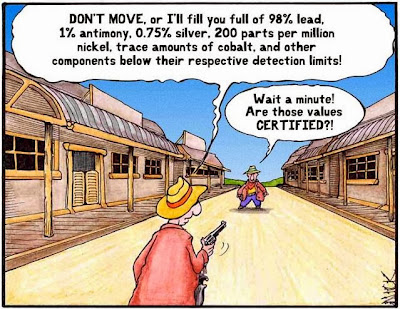 Strange, the old town don’t seem quite so lively no more, but they say that’s a good thing and who am I, the Diversity Evaluation & Ethnic Efficacy Monitor, to argue? Some say Deadwood finally lived up to its name… I don’t get it.
Posted by Batsby at 07:49

Email ThisBlogThis!Share to TwitterShare to FacebookShare to Pinterest
Labels: #ourday