I rarely watch Channel Five. There are many good reasons for this, principal among them being the dire programing and excessive reliance on lowest common denominator advertising; it makes me feel dirty even going that far up the channel listing. For all their lefty-leaning faults, the BBC does produce some spectacularly good television and I have never called for an end to their funding – merely their overt on-message proselytising.

Anyway, last night saw the screening of Five’s in-your-face offering entitled “On Benefits & Proud” and while other channels might seek to present such pseudo-documentary footage in a balanced and sensitive way, the narration for this show was written for one purpose only – to stoke the fires of fury against those who would work the system; not so much “How can they?” as “How bloody dare they?” And of course it works. Based on the advertising content – gambling, unsecured loans and trailers for other freak shows – I’m guessing the underclass, as unselfconscious as children, also loves watching its own kind at play.

But surely there’s an even better way and a chance to make it pay? Why not go the whole hog and instead of just winding up the taxpayer via the telly, round up all the determined doleys and place them in a purpose-built, actual zoo? That way, the footfall of paying public would determine the amount of resources they were given. They could literally earn their keep and provide employment for their keepers, by which, of course, I mean their guards. This could really work and if they are entertaining enough their standard of living could be very reasonable. They might even turn a healthy profit, become a growth industry and start actually paying tax!

There is even a possibility that like the panda they may find it difficult to reproduce in captivity thus bringing about the eugenicists dream, although there is little evidence that being closely observed and even openly mocked is likely to have any effect on their rutting instincts. It's unlikely then that there will be any international exchange programme for breeding pairs but there will ample opportunity to experiment with extreme cross-breeding. Maybe we could breed examples which come ready tattooed, for instance? Or with spots? (Strike that last; they all seem to already come with spots...)

Conversely, should fascination with them wane, we could simply do what other failing zoos have to do with the animals they can’t re-home and put them down. And so there’s another opportunity. You can’t just shoot people like you would a lame horse, can you? No they must be given a fighting chance and a last opportunity to do at least some good in their pointless lives. Many soldiers suffer from PTSD following action, often from realising the enormity of what they have had to do. Well, if we could train them up by letting them cull the worthless, unwanted zoo overspill, they might go into battle suitably hardened. It’s a thought and not entirely without merit.

And just as battery-farmed hens and veal calves know no other life, so the products of what is currently little better than an unrestrained government-sponsored breeding programme anyway could simply be brought up to expect nothing better. Not really all that much different from now, if you think about it. A life in the relative safety of the human zoo, followed by a swift end once their entertainment value runs out. Think of the fortune that would also save the NHS. And if the army isn’t up for it, I have an even better idea and a money-spinner at that. 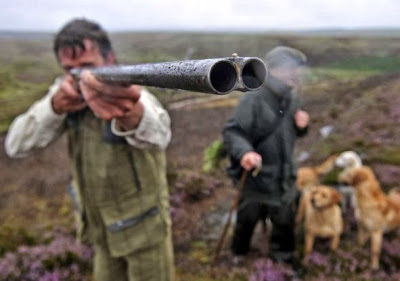 Hush man, I'm about to bag a brace of Scousers!

Every year, on the twelfth of August, rich businessmen pay a fortune to be let loose on exclusive Highland grouse moors. You can’t tell me that while they are taking aim at the gamey avian targets they are not secretly wondering what would happen if they ’accidentally’ took out a beater…