The row over qualified teacher status continues with yesterday’s  motion for an Opposition Day debate,‘That this House endorses the view that in state-funded schools, teachers should be qualified or working towards Qualified Teacher Status while they are teaching.’ challenging, or at least giving the appearance of challenging, the coalition’s Free School programme. Labour’s Tristram Hunt has hinted that he may send his own children to private schools as so many hypocritical champions of state education do, thus avoiding any need to confront the outcomes of his proposal.

The debate was entirely predictable, of course, with both sides banging the drum, both sides claiming the moral high ground and both sides ignoring the grim reality that in the view of many, education in Britain is clearly a disaster and furthermore a disaster fifty years in the making. Watching from the inside, as a pupil, I saw my combined Grammar and Secondary Modern school deteriorate over a single school year as it became a Comprehensive just one year behind mine. Add to that incarceration, against their will, of thuggish fifteen year-olds now compelled to attend another year and it was as if the school just lost the will to live.

Teaching is a hot topic worldwide right now, so much so that a World's Top Teacher competition is to be launched next year: But on what basis will the winner be judged? Will their efficacy be assessed over, say, twenty years to show how the kids actually benefited? Or will it, more likely, be based on the number of theoretical pedagogic concepts that can be demonstrated in a twenty minute lesson? In which case it becomes just another example of the pointless exercises in self-justification so beloved of politically motivated organisations. It would be far better to run a competition to investigate and demonstrate just what has gone so horribly wrong in the last half a century to reduce our own state education system to the shambles it quite clearly is.

Or is it actually not a shambles at all but the intended culmination of a series of shadowy conspiracy theories? Is it a Leftie triumph, preparing the mediocre to live out their lives as a client underclass on benefits, creating a justification for immigration and helping to rub The Right’s noses in diversity? Or is it, as some may claim, a Rightie triumph whereby the children of ‘the poor’ are given only sufficient education so as to be useful workers for the children of the rich, as this parody in the Evening Harold illustrates? It’s the same, the whole world over, it’s the poor wot takes the shame, eh?

One thing is for sure and that is the years of steadily declining outcomes – employers and universities have been bemoaning the unpreparedness of their young intake for several decades now – can’t be just entirely accidental. It may be negative feedback originating in the nineteen-sixties obsessions with introducing radical new ideas, each diminished generation passing on their mediocrity to the next, but I somehow doubt it. No, I think there is something worse at the heart of all this – the expert. In a world where even the amount of sugar allowed in jam has to be regulated by government the obsession with pedagogy is almost inevitable. And in such a nebulous area as child development everybody is some kind of expert; which is to say, quoting William Goldman out of context, “nobody knows anything”.

During yesterday’s Commons debate MP Pat Glass said “Qualification is the very basis of a state-run education system.” (Qualification, not Competence.) And there we have it; as ever the argument is for closed shop, state-run institutions because as everybody knows, the state does everything better, doesn’t it? Power generation, health, transport, steel, telecommunications… what could possibly go wrong in a market whose providers and consumers are entirely controlled by such safe hands as the Department for Education?

But what use is education if, afterwards, we end up with adults not only unemployable, but unable to properly read and analyse the issues of the day and then engage in sensible debate? What’s the point if they are unable to discern economic fact from political fiction or earnest pledge from hyperbole? Why bother if we just end up with the same old tribes whose beliefs and votes are based on purely historical precedents; and inaccurate, corrupted history at that? Then again some people probably shouldn't be burdened with the vote no matter how well educated they are. 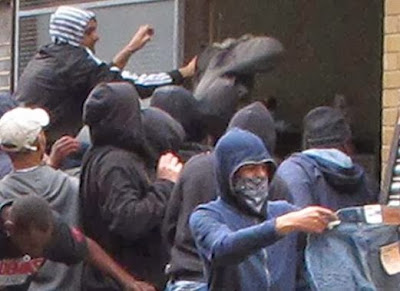 We don't need no education

One thing is for certain though: much as I rail against a lot of their ideology and unproven, fashionable education theory, teachers must have increasingly broad shoulders, for upon them they carry the hopes of the nation. Qualified or not, only those who CAN, should teach.
Posted by Batsby at 07:21