The truth of the matter?

So the police lied about the actions of former government Chief Whip Andrew Mitchell in the grubby Plebgate affair? Was anybody surprised? No matter; their primary objective was achieved. Politicians lie as if it were part of their job description and when they are not outright, bare-faced lying they are evading, obfuscating and misleading as if their lives depended on it. And according to the well-worn phrase, even abstracts such as statistics lie almost by definition.

The will-it-never-go-away McCann disappearance drama has not been kept afloat for six years on a raft of incontrovertible truths; rather, press and social websites vie with each other to construct an ever more complex web of deception, conspiracy and downright evil. Somebody, somewhere knows something crucial and that somebody, or somebodies, is keeping schtum… and keeping a whole shameful industry of deception buoyant in these uncertain economic climes.

Green energy advocates routinely lie about the efficacy of wind turbines while – let’s call them ‘red energy’ cheerleaders – invert their hockey stick graphs and claim they alone know the truth. The lights will go out, the future is orange, the glass is half full, think yourself thin… Bang! And the dirt is gone! Advertisers, mediums, healers, preachers, shaman and charlatans lie to us every day of our lives and we even enshrine some of those lies in weighty tomes we then call holy, allowing people in court to swear on a pack of lies that they will behave for a short while in a matter that is contrary to the acts that landed them in trouble in the first place.

As Jack Nicholson’s Colonel Jessop put it, we can’t handle the truth. Acting itself is the very art of lying; of pretending to be somebody or something we’re not and we clap and cheer and hand out awards to its best practitioners even as parents – who lie to protect their children from the world – fight a losing battle of trying to teach their children (liars by instinct) that telling fibs is wrong.

Lying it seems to me is entirely natural  - many animal species lie by camouflage, by omission, by stealth in order to hunt, to hide, to protect their broods, to eat… to survive. Why should humans be any different? And it’s a long established falsehood that honesty is the best policy and crime never pays. Both are palpable lies against the evidence of the ages that unthinking honesty can land you in hot water, while a bit of crafty subterfuge can net you huge rewards.

Literature, history and folklore is littered with liars: Walter Mitty, Billy Liar, the boy who cried wolf, Charles Ponzi, Richard Nixon… Pinocchio. The list is long and these are just the acknowledged liars. Delve into society and you soon realise that lying, far from being aberrant behaviour is part of the fabric of human existence itself. You look well, congratulations, oh this old thing, I forgot, I don’t know, the cheque is in the post. We should be ashamed, but we’re not. 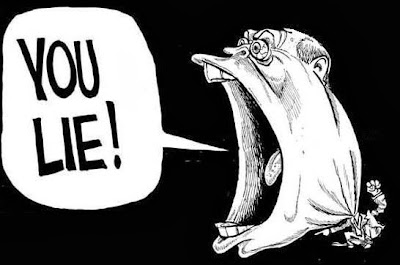 So next time you call your kid out on a falsehood, next time you pass judgement on a disgraced public figure, the next time you try to convince yourself that you are holier than your neighbour just remember, you’re probably only lying to yourself.
Posted by Batsby at 07:24