I just haven’t got the energy...

So, the big debate of the moment is happening right ahead of the annual dread reminder of winter. When the clocks go back and British Summer Time ends we are plunged artificially into a self-imposed mini dark age. For the next five months, whatever the reality, it’s as if our primitive animal brains shut down altogether and we go into a form of hibernation – cue the plaintive cries of imaginary SAD sufferers for whom this is akin to the apocryphal theft of days of their lives in the Julian-to-Gregorian calendar shift of 1752. And it’s infectious, this winter retreat from joy; “Woe is me!” we cry as we huddle together to share our misery.

Energy. We all use it, we all need… we actually all generate it. And apart from the ‘need’ bit which is actually very small and can be gained from little more than a couple of chip-shop butties a day, for most of us the other two - ‘want’ and ‘generate’ - are well within our control… if we want them to be. Are you all sitting comfortably for the “When I were a lad…” speech?

When I was a lad, guest houses actually advertised ‘Hot and cold running water’, people dreamed of ‘wall-to-wall carpet’ and the day somebody in the street got colour television was a day to bake a cake and get out the bunting. As some of you know, for the first five years of my life our toilet was outside; early in 1963 it froze solid for a week. And the notions of double glazing and central heating were so far from the reach of poor families as to be almost the definition of fairy tale aspiration. Even loft insulation was an expensive gamble – most of the heat would be whistled away by the draught, through the gaps in the doors and windows.

Heating the house in the morning was a waste of coal, so the standard routine was a bustle from bed to breakfast and out to school and during some of Labour’s finest hours we sat, still wearing our coats, in dark, unheated classrooms – where else was there to go? At break time in frozen playgrounds we were encouraged to run around in a Dervish-like frenzy to keep warm. The point is we not only survived but we thrived because the alternative was to give up and now, as my generation approaches retirement age, I can only be saddened at the loss of that characteristic British determination to win.

Labour’s latest gimcrack soundbite is ‘cost of living crisis’, repeated ad nauseum and the masses are going for it. But just take a look at yourselves; compared to fifty years ago even the very poorest are living in a manner profligate beyond our wildest fancies. Always-on heating, twenty-four-seven entertainment… a phone in every pocket for goodness’ sake? This sort of thing was the stuff of science fiction back then and even then only imagined for the wealthy.

Nobody wants to go backwards but part of the solution to the energy crisis is in your own hands. I regularly walk into houses with heating on and windows open, even in summer time. In winter I see families dispersed around a home, all doors open, all lights on, multiple sources of electronic noise competing for attention and lounging about in summer clothes as money is pissed up the flue. Nobody thinks any more; they just take heat for granted and have little notion of self-reliance, as if it is a human right to be comfortable. It’s not.

David Cameron never said to put on a pullover; Jumpergate was a concoction of journalists looking for a nasty Tory story. He didn't fall for their cynical trap but they told the tale as if he had. But what of it? If he had said it he would have been perfectly right. Everybody should know what their energy costs while they are using it and not just when the bills come in. Get yourselves to energyhive, buy a monitor and get saving. If you can’t save the cost of the forthcoming fuel price rises you’re simply not trying and I'm wasting MY energy trying to help you.

All of this is symptomatic of a wider malaise; an inability to take responsibility for our own lives. I hate the phrase ‘sleepwalking into’, overused by politicians and media to indicate the almost accidental movement towards undesirable outcomes. I hate it because whenever the government or opposition invoke this somnambulistic phenomenon I've usually been watching it coming from a mile off and decades away. And then when government finally wakes up and does something, you lot just moan about it. Too little too late? Maybe, but left to Labour we'd already be turning the lights out. 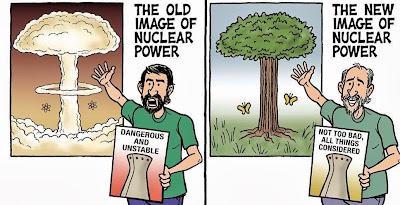 We knew our national generation capacity was going to be stretched. We knew that so-called renewables were an expensive non-answer to the situation. We knew that delaying and delaying and delaying was not an option and that the longer we waited the more expensive it was all going to be. For most of my life I have been saying that nuclear is the only sensible, practicable, affordable option so Hinkley C can only be a step in the right direction. I reckon the strike price of £92.50 per MegaWatt-hour will look bloody cheap in ten years time. Oh and is it only me that finds the phrase ‘first nuclear power plant in a generation’ unintentionally funny?
Posted by Batsby at 07:34