Flash Gordon had already been saving the world for two decades before shiny, new upstart Dan Dare – Pilot of the Future – exploded into the popular psyche of the nineteen-fifties and for the next two decades they vied with each other for zeitgeist supremacy to the delight of schoolboys the world over.

But in the mid-seventies, punk rock put paid to their fortunes. Suddenly the ray guns and rocket ships were abandoned – even the word ‘cool’ was ditched for spitting, bondage trousers and bin-bag blouses as the Sex Pistols pissed all over tradition. Dreams of hover cars were shelved for many years as rebellious youth called to smash the very system the two heroes had hitherto valiantly defended. As their popularity waned, publications went into liquidation and they both retired to tend their allotments and lick their wounds.

Yet they remained famous the world over. In fact it had become a source of some rivalry between them. One day Flash had popped out to the High Street to buy twenty Rothmans for Dale Arden, the missus, when he bumped into Dan Dare coming out of the post office after collecting his pension. They got to chatting and decided to stop off for a swift half in the Flying Pig to reminisce about old times. As men will do they traded stories of their triumphs, each tale gainsaying the last.

After a couple of pints, as Flash was getting his round in, he turned from the bar and asked of the motley assembly ” Does anybody here know who I am?”

To a man they chorused “Flash Gordon, saviour of the universe!” and started to chuckle; they’d heard it all before.

A little piqued and slightly flushed, Dan got to his feet and asked, “But who am I?”

“Dan Dare, pilot of the future!” they cheered and broke into applause.

And so arose the wager. Each convinced they were more famous than the other they set themselves the mutual challenge of proving it and set out to travel the globe. In the Vatican the crowd asked who the bloke in the pointy hat was, standing up there next to Dan. At the White House tourists wondered who the fly black guy was, shaking hands with Flash. Wherever they went they were equally recognised and the bet was never settled. This was clearly no answer to their contest and they needed a winner-takes-all deciding bout.

Eventually, Flash came up with a solution; “We must travel to the remote regions, away from the modern world!” And so they did. But even then, Dan was recognised in Papua New Guinea and Inuit came out to vigorously shake Flash’s hand in Greenland. Pashtun tribesmen greeted them like old friends and even the Kalahari bushmen mimed ray guns and rocket ships. It was hopeless. Until one day they found themselves travelling by canoe up the Congo River in search of the remote Mbuti Pygmies.

As the trees closed in and the river narrowed, the sounds of the forest engulfed them. Above and around them, from the undergrowth and the canopy they became aware they were being watched. Dan and Flash exchanged a look; for all their adventures this was making the small hairs stand up on their napes. Eventually they came to a sandy river bank and beached their craft. As they alighted from the canoe a rustling from the bushes alerted them to their reception committee. Two dozen diminutive warriors stood poised with spears and blowpipes.

The pygmies stared at the pair with impassive poker faces. Not a glimmer of recognition. This might be awkward. The closest of the pygmies prodded Flash with a spear and by this the pair understood they were to take the track that led into the darkness. After a few hundred yards they came to a wide clearing, surrounded by tree houses. A tied pig squealed and small children gathered round, wielding miniature spears.

The two heroes towered above their captives, sweat breaking out on their brows. They knew this was serious. Forget the bet; who cared who was the most famous? All they cared about now was getting out alive. Above them a sound of creaking wood from the largest tree house. A fat, bald man of indeterminate years, with a huge bone through his nose waddled out onto a makeshift veranda. He held aloft an elaborate spear, decked with feathers from exotic birds and adorned with dangling skulls of small animals. And teeth. Lots of teeth.  The next moment would decide their faith. 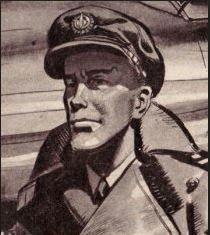 The crowd fell silent. Even the incessant noises of the jungle seemed to quieten as the Chief stepped forward and looked down upon his visitors. His chest rose as he drew in breath, waved and in a cheery voice bellowed “Hallo darn dere!”