I’ve been on the planet for over half a century and in that time I’ve seen a fair bit of weather. And I’ve examined it more than most because I specialised as a meteorologist in the Royal Navy. These two facts – my time on earth and my specialist training - make me better qualified, by far, than probably anybody involved in making policy regarding the disputed religion of man-made global warming. Sorry, we call it climate change now, don’t we, because we actually haven’t a clue what’s going on.

Of course, extreme weather events are a very recent phenomenon, beginning a mere few gazillion years ago but, lazy arses that they were, they’ve only been jotting them down for the last thousand. Here’s a short list I found on Wikipedia (with links, should you be interested) in a matter of minutes.


And then, during my own lifetime we had the winter of 1962-3 which I remember vividly because, despite the apocalyptic headlines of three winters ago, it had a far greater impact than today, the snow not clearing until March and such things as central heating being a rare, mansion house luxury. And yet the schools didn’t close at the fall of a single snowflakeflake and in later years when we had power cuts, we studied pretty successfully in unheated classrooms, wearing coats and scarves.

Then there were massive storms, north and south in 1968, which I also remember because many trees were lost and I managed to fall into a hugely swollen river and survived by mere chance. (It was after that little escapade that it was decided we should learn to swim) But the thing is, everybody accepted the weather – an act of God – and got on with it… until. Until Michael Fish’s bête noire, the Great Storm of 1987 (We really need a proper naming committee for these things.)

That, I think is when we all got obsessed. Back in 1963 the news stuck to reporting the facts and very briefly at that. Television simply wasn’t on all day and the notion of 24-hour rolling news would have been as utterly ridiculous as a channel dedicated to the weather. But those hours of screen time now need to be filled and so every year since 1987 has been marked by some sort of new record. Largest diameter single hailstone ever recorded on a Monday afternoon in Sevenoaks, for instance, or most rain in a single shower ever recorded adjacent to junction 38 of the M1 on any July 23rd... “since records began”

Of course, when previous accounts are so sketchy and the weather so varied you can conjure up sensation from pretty much any event. And as the weather comes in cycles – for our younger readers, we used to call them 'seasons' – a few months with little rainfall is instantly forgotten when the news media incorrectly reports monsoon conditions. (Incorrect because ‘monsoon’ describes a seasonal reversal of prevailing wind direction and is only incidentally connected with precipitation – I told you I know about this stuff.)

On the Daily Politics yesterday they all said  that extreme weather events are happening more frequently now, despite there being only hearsay evidence for that claim. What is actually happening – those headlines don’t fill themselves you know – is that the weather is just being reported more frequently and with rising flood levels of hysteria. Why would DP's guests go along with the idea? Well, because not one of them knows anything at all about it, but they are guided by ‘experts’ who tell them to spend, spend, spend on combatting the Quixotic windmills of AGW.  Far be it for me to mention the warmist morons stuck in the summer ice… I’ll leave it to James Delingpole, who always gives excellent blog on the subject; I urge you to read it.

The same sort of inward-looking reasoning afflicts all areas about which we should be concerned. The welfare state, the economy, employment, housing and immigration; in all these areas the government, instead of looking out of the window at what’s actually happening rely on experts to both tell them about it and suggest a solution. And the sheeple blindly look to government to solve problems which may either not exist at all, or be irresistible in their nature. 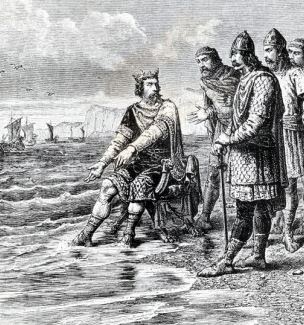 My socks are soaked with Bulgarians!

The story of King Cnut and the waves – at least the version my generation was taught and the one favoured by history – is said to illustrate that even a ruler hailed as a god on earth is impotent against the unstoppable forces of nature. This applies as much to the floods as to the rising tides of humanity arriving on and from within our shores. Isn’t it about time those cnuts in Westminster took heed?
Posted by Batsby at 07:29