Hakim, the fakir was renowned throughout India as a wise old mystic and in his later years he was much-consulted by Mahatma Gandhi as he pondered the nation’s fate and the great passive resistance campaign against the British Empire. In fact it was Hakim, in 1906, who had first proposed and then helped Ghandi develop the principle of satyagraha, or insistence on truth, which sustained his resolve and eventually brought independence to the nation.

Hakim’s was not an easy life. Born as a humble Dalit, outside the caste system, his life chances were limited; the best ‘untouchables’ could hope for was an existence unmarred by violence and resentment in the hope that they might return as a barely improved Shudra and live to serve the higher castes. But Hakim took another path and set out to travel the length and breadth of Mother India and give himself over to the spiritual life.

They would spend many hours in meditation and then retreat to a simple hut to quietly consult. It was in these close confines that Gandhi first became aware of the old man’s only difficult feature. On a diet consisting almost exclusively of lentils, Hakim was a flatulent old fakir, but far worse than his trombonic flatus, when the old mystic beckoned Bapu lean in to hear a whisper, the full force of his truly appalling breath became almost too much to bear. Seeing the reaction, Hakim grew angry at himself for subjecting the Great Soul to such abuse and vowed to exile himself from the company of man.

Hakim grew older and Gandhi became busier and by 1935 they saw each other but rarely and never in close company. The last time they met was on the fakir’s death bed and Gandhi was ushered into the rude bedchamber to see the wizened old man as he breathed his last noxious breath. Gandhi stood vigil at his side and surveyed the skeletal body; the leathery skin, feet scarred by a thousand miles of barefoot endeavour and that kindly face, smiling even as he neared death. One last sulphurous burp and Hakim was finally gone from the world. 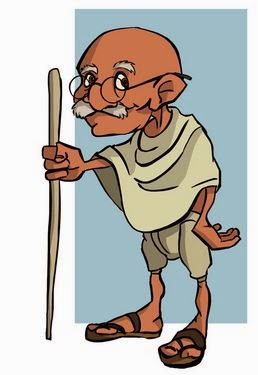 The loyal servant of India was afforded a simple grave and an equally simple ceremony, which Gandhi attended to deliver the eulogy. Amid the tiny gathering Bapu praised the old man’s simple life and credited him with originating much of his own philosophy. At the end they all kneeled and bowed their heads to say a silent prayer and offer their last farewells to the super-calloused fragile mystic, vexed by halitosis.
Posted by Batsby at 05:08