Don’t you get fed up with all those posted links that promise to reveal shocking or funny or sexy ‘facts’ without which your life would have less meaning? Ten scary diseases, funniest photo ‘fails’, the top 10 worst celebrity wedding dresses ever and so ad-infinitum. Or those news stories, reported in social media, via other social media sites, which incorporate the item into their own advertising-riddled, bandwidth-heavy pages. What is wrong with people? It’s a form of Parkinson’s Law in operation; data will expand to fill the bandwidth available. Whatever happened to the Spartan days of the nineties when everybody was trying for optimal download times and Google emerged as the only effective search engine which was clean and tidy and actually delivered what you sought?

Serial offenders tweet and re-tweet the links as if to say “Look at me! I have nothing to say, but look at me anyway!” And until you recognise the ploy you’re tempted by these intriguing links and onto their fancifully ‘moneytised’ sites and then wonder what personal information of yours you divulge as cookies dutifully clog up your system and they earn a few tiny fractions of pennies from the deal. It’s all about me, me, me, because few of the rabid insidious click-baiters seem to ever engage with any other users.

Then you have the other extreme whereby the whole of the new media is there purely for fragile egos to seek support for their whining causes. And there are few whinier causes than the train-wreck that is ‘Dr’ Jack Monroe; forever setting herself up as the victim following the reactions to some ill-judged outburst. Yesterday she set a small part of Twitter alight by tweeting some bollocks about how her five-year old had seen one of the hate-tweets she exists to attract and how she had then had to explain it to said child.

Perfect. Perfect because this then elicited a heap of responses as to why she was exposing her brat to her online hell and this sort of abuse is pretty much the reason she gets out of bed most days. In her warped, entitled, self-centred world everybody else is using her child as some form of punch bag and she seems utterly oblivious to everybody’s genuine outrage that she has, once again, used her child to talk about… Jack Monroe. Sorry, I should say ‘Doctor’ Jack Monroe because she somehow managed to blag an honorary doctorate for services to lesbian victimhood. A pity she didn’t also manage to snag the class not to flaunt it.


We all like a bit of attention but some take the piss. One of the most selfish things you can do is to bring a life into the world without asking yourself if you are suitable parent for that child. So when people have the nerve to express doubt about her very public lack of credentials she gets to have her daily Violet Elizabeth Bott episode until everybody else is sick. In the mind-set of the illiberal left of course, expressing a dissenting opinion is hate speech of the worst kind. Bad parenting is beyond reproach but reproaching bad parenting demands the full attention of the law. 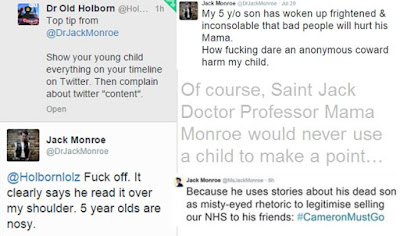 She continually sets herself up as Aunt Sally and then sets her fellow be-tattooed lesbian attack dogs on those who dare throw missiles her way. As for using her very publicly state-funded fatherless child as a punch bag, what about her constantly using that same child as bait for the psychological self-harm of attracting opprobrium?  More selfish than bringing into the world a child without thought? Bring a life into the world and then use that life to continue making it all about you. That, Jack, is the bit you never seem to understand.
Posted by Batsby at 05:50