Normally, before I blog, I do a few seconds of research. But every now and then I go deep and really get into the detail of the matter in hand. Today I am relying on source material of such magnificent pedigree it would inform and add to your experience if you were to spend a moment studying the inspiration for yourself... if you can get beyond the spelling, grammar and general lack of coherence. Here’s the link:

My friends, colleagues, fellow workers… Yet again we are dealing with our eternal struggle; our struggle for justice for the true working man. This never-ending battle has taken some wounding turns but still we stand proud, together and together we stand, er, proud. We have the chance of taking another turn, for better or for worse, in sickness and in health, till death us do part... No, that doesn’t sound right at all. Where was I?

Ah, yes, yet again we are dealing with the old enemy, poverty. Poverty of ambition, poverty of aspiration and poverty of class; a piss-poor class, hell-bent on greed, wanting more and more of what we have worked for at any cost to the economy. We are the slaves, to be exploited to give them their unearned living. I know what some of you are about to say; slavery was abolished a long time ago but no, you couldn’t be more wrong. This isn’t slavery of the masses; it is slavery of the few. We are the 1% and we are there to be milked until the 99% get all that they desire.

We are still fighting this class war and it is we who are still losing. Since Saint Maggie was burned in effigy to save us all we have been persecuted by an ideology so perverse it masquerades as freedom even as it chokes the aspiration from the throats of our children. It holds that poor education, high taxes, inefficiency, the abolition of choice and the unfettered flow of welfare is the most efficient way of achieving the greatest social political and economic good.

And this is all hidden in a flurry of nonsensical labels as these warriors for social injustice spout crypto-revolutionary, anarcho-cynicist , neo-Kinnock dynasticism... in guttural northern flat-cap accents masquerading as Socratic dialectic discourse; and claim proletarian credentials just as smoothly as if they were not subsumed into the clinical-bedlamist plot and a desperate need to grasp power and take over the keys to the asylum. Among their insane plans they oppose self-determination and free speech and plan to introduce draconian controls on all human behaviour under the guise of ‘diversity and equality’ and that most discredited of all ideologies, political ‘fairness’

Not content with destroying the grammar system, the means by which many of their class escaped self-imposed drudgery, they went on to close the mines from within and cheered as the bully-boys in the unions shut the factory gates one by one. Filled with a blind hatred of upward mobility and under the delusion that this is somehow caring and compassionate, they seek to drive the most vulnerable in society - those who pay all the tax – into penury. They would make them the scapegoats for daring to lift themselves out of austerity while never laying a finger on the super-rich who they regard as some sort of evil, untouchable mythical beast.

And as if to ‘prove’ all this they write poorly phrased polemic, blaming the sensible, hard-working middle classes, whose wealth diminishes day by day as the price of a decent bottle of wine or a portion of truffles rises out of their reach. “Soak the rich!” they cry, “Squeeze them until the pips squeak!” they urge and then carry on soaking and squeezing, secure in the knowledge that we are too busy working to provide them with a living to be able to engage seriously in politics, while they possess, and hoard for themselves, the greatest resource available to man. Time. The devil, they say, makes work for idle hands. 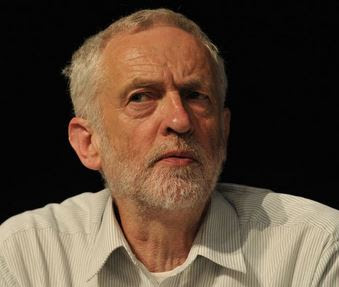 Wait a minute... are you taking the piss?

Comrades Colleagues, we must come together to fight this evil. If we are not a movement to create a better society for everyone, then what the hell are we for? Do we just wave a white flag and let those moochers do what they want? The grass roots members, the working people of this country, should fight to end this poverty they would thrust upon us; this austerity they brought about. We should reclaim that hallowed ground and restore the beautiful British way of life our fierce forefathers and their fine free fellows fought for. How can we stop them seizing power? We have the chance and we have the ultimate weapon. We can return Labour to their leftist past and leave them there. Friends, I urge you to vote Corbyn and keep Labour out of power for a lifetime.
Posted by Batsby at 07:44