Apparently, there’s been a budget. Lots on Twitter about it yesterday and all sorts of conclusions drawn, among the wildest of them being some kind of eugenics programme introduced via the curtailing of child-related benefits for future recipients. I actually saw the word ‘genocide’ being used at one point. Now, it’s probably my insufficiently mature, non-left brain mass, but I don’t think that not paying you for something you have the absolute choice to do or not to do is quite the same as forcibly plucking your mewling infant from the teat and dashing its brains out on the floor. Nor is it as extreme as, say, the kind of screening and sterilisation project I’d heartily favour to quickly rid of us of the human vermin who bob around the murky waters of the underclass.

Sod the “Who’s going to pay for your pension?” argument; bring on the robots I say. We should be clever enough by now to work less, not more and be educated well enough that we can use our non-working time profitably; and not just in the consumption of lowest-common-denominator, audio-visual Soma™ but the kind of life-enhancing projects that visionaries like William Morris dreamed up in the post-industrial, post-government utopia he longed to see. Okay, he was a card-carrying revolutionary socialist and arch nutter but he did knock up a nice wallpaper.

The budget brought forth the usual partisan jeers and cat-calls with the broadly right trumpeting the bold moves to curb the state and the left wringing their caps and rending their garments in agony. The brutes! They cried, painting Hogarthian imaginings of desperate, filthy hordes with comedy teeth roaming the excrement-laden, cobbled streets of Rundown Town, their ragged dozens of children clinging to mother’s sick-stained apron while random non-attached, drink-addled, feral male brutes beat every brat in the vague possibility it might be one of their own. I swear the likes of Owen Jones would actually prefer to see this than the reality of… well, of not very much really.

Because when all’s said and done the budget is very much a sideshow to the far more important business of getting on with it. When beer was a shilling a pint, cutting a penny off the price might have raised many a glass to the Chancellor of a Friday night. But last year’s penny off meant you’d have to drink around 300 pints to get a ‘free’ one, which is probably why he didn’t bother this time round. For all that the professional analysts are calling this ‘far-reaching’, ‘game-changing’ and a ‘new-settlement’ and for all that it wrong-foots Labour’s increasingly slippery purchase on reality, it’s just another tiny bump in the road. 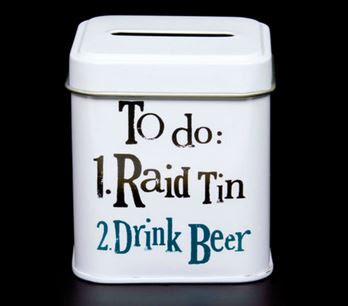 Relax, it's only beer money...

If your living is so marginal that a national budget pushes you over the edge then you do actually deserve all the help you can get, but the mundane truth for most of us is that while it might, or might not occasion a change in some voluntary behaviours, it isn’t really any more significant than that. As for the fear, bring it on. If the left’s bell-ringing alarums are frightening enough people to think twice before having kids; or persuading them to quit drinking, get a job and resolve never to be dependent on the state for a living then job done. Sadly, when it came down to it, the best Labour could manage in response was “That was our idea!” and “Yeah, okay, we’ll give you that.” Cheers, George!
Posted by Batsby at 06:13