Nobody knows the best way to run a country and, if we are honest, even governing a small town is beyond the competence of most of us. For the developed world, a form of representative, liberal democracy has long been accepted as the least-worst system. But maybe the Covid crisis has now demonstrated the hideous flaws in allowing the hoi polloi to decide who gets a hand on the tiller of the tramp steamer of state. This last year has also shone a sickly light on free-market capitalism, given that the far too biddable decisions of millions of morons can often influence policy.

It has glibly been assumed, without much question, by advocates of Adam Smith’s ‘invisible hand’, (which heretofore included me) that the free decisions, in their own self-interest, of the individuals of a population will ultimately regulate supply and demand far better than a centrally planned economy. And that even though inequalities arise, all boats are lifted by the rising tide of national wealth.

But it’s not fucking true, is it? Some boats, particularly the boats laden with the human detritus of our shipwrecked society, are pre-holed below the waterline, as if they have been supplied by people traffickers trying to squeeze one last trip out of a worm-ridden hulk. Popular democracy might sound like a great idea but sometimes the electorate actually does need saving from itself. There, I said it; some people’s instincts should be disregarded; some people should never be allowed to vote; and perhaps some people should never even have come into being.

But we are where we are, by whatever route we travelled and ‘here’ is a place that nobody voted for. Were the pandemic waved away tomorrow we would still be screwed. Those who have lost their livelihoods will need help and many who have retained theirs were already in too precarious a financial situation to be able to help. The wealthy, as ever, will probably suffer the least, but there will also be casualties among formerly higher rate taxpayers.

The eternal puzzle of how much should I be forced to pay from my surplus to meet your shortfall will exist regardless of whether the left or the right are in control. And in the UK it is often difficult to tell which is which, given that both sides continue to vie for popularity, rather than authority, governing not by conviction, but by opinion poll. (I wonder if an Opinion Poll Tax would help out?)

Admittedly a supposedly representative democracy is probably better than direct democracy, but only so far as the elected actually do represent the best interests of their constituents. But they don’t. People in Britain don’t really vote for representatives, they vote for a political government as a whole… and then watch, dismayed, as election promises are abandoned at what often seems like a capricious whim and the policies of the other side are adopted.

But it shouldn’t be about Labour or Conservative, left or right, it should be about right and wrong, and bringing about a world where, as far as is feasible, everybody takes part. Isn’t it time we actually had the long overdue conversation about how we tackle the real issues, the ones that actually damage people; how we let people realise their ambitions but not at the expense of others; about how we drag the underclasses kicking and screaming into society? 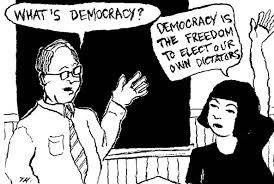 I don’t usually link blogs – if I’m honest it is the same three or four subjects re-hashed ad infinitum – but over the week I’m going to try and suggest a few changes we might want to consider, in order to bring about a better world, at least here, in the crucible of modern civilisation. I shall call my new system ‘socialism’ in the certain knowledge that it has never been tried, anywhere in the world. Not properly. More tomorrow… if I have the stomach for it.