I would have a lot more time for socialism if those making a living from peddling it were instead actually practising what they preach and doing something about the lives of those they claim need to be rescued by it. As far as I can see, socialism for all of its 170-year history has signally failed to improve the lives of those who vote for it. Meantime capitalism, the system by which pretty much all trade exists, has increased material wealth for all, but generated some, on-the-face-of-it grotesque, imbalances.

Maybe it is a simple fact that humans are not very good at making impartial decisions and equitably sharing out what we have amassed. In true ‘more equal than others’ fashion, socialist politicos are notorious for jumping housing queues, getting planning permission for favoured religious buildings and creating nepotistic dynasties throughout the public sector. Meantime, more than a few Tory MPs have been mired in scandals involving huge financial privileges granted to friends, family and powerful benefactors.

Politicians of all stripes are less trusted now than they have been for many years and yet all of this still carries on. MPs who have been imprisoned for fraud, perjury and the like should not even dare to show up again in public, yet they retake their seats on release from jail as if butter wouldn’t melt in their mouths. They are caught out in newspaper stings in such embarrassing circumstances that most of us would change our names and flee the country, yet continue chairing select committees on Standards in Public Life. Or they appear in their underpants cruising for gay sex, but then imagine they can adopt moral stances without criticism.

Whatever you think of the Orange Man he was dead right on one thing; the swamp needs draining; as true an ambition over here as it ever was in the US of A. Forget your big global conspiracies, your New World Orders, the Great Reset and all of that guff. Change at that level is nigh-on impossible for we mere mortals. Much as I hate the term, co-opted as it has been by the Labour Party, change needs to happen at grass roots level.

Every person in public office, from the school board up to the House of Lords, should come under close and highly intrusive scrutiny. It should not be possible to award a contract to anybody with whom you have any connection, or by which somebody you are connected to may profit, without full disclosure, and pending approval from people outside your closed circle of colleagues and friends. And if it is unavoidable that a policy you have championed enriches your nearest and dearest the very least you should do it to retire from public office.

As a start to this swamp-draining, anybody seeking office should be assumed to have nefarious reason and be under such detailed scrutiny that only the whitest of white (and I make no apology for the use of that phrase, you all know what it means an if you are offended then you are also unfit for office) could ever make it through to nomination. And all voting for MPs should be via personal attendance, identity proven, apart for those in exceptional circumstances, for whom ballots should be collected directly by at least two, sworn-in officials of at least two different political allegiances. 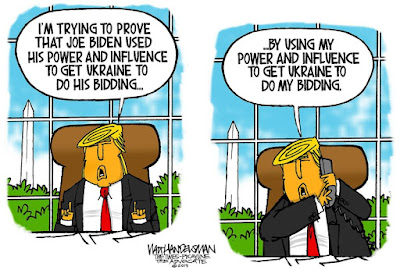 The shenanigans over the pond over the last week should leave us in no doubt that western politics is broken. And the insertion of predominantly Pakistani muslims into so many political seats from which they seem unassailably capable of practising politics in a less than, shall we say, a western democratic manner, should be cause for concern for all. Politicians like to talk about fighting for things; isn’t it time we fought back?