I have to say it has been quite an education this past year, peeking into the mindset of Joe Average and realising that what lies between those average ears is malleable to an extraordinary degree. Beliefs that can flip on the toss of a coin are clearly not deeply held convictions, but the new vision of the converted is a force of nature to behold. People who were once healthy sceptics are now worshippers at the altar of one unifying dogma or another.

The anti-vaxxers have their religion but why should they impose it on others? This is especially invidious when you factor in that the anti-vax, anti-lockdown converts have a large Venn intersection with the free speech crowd. So what is it, freedom of speech but not if you say you are happy to comply with the government's attempts to save lives? Surely the right to disagree is embedded in the very core of freedom of speech. (If you don’t like that opinion, I have others.)

This duality pervades every debate; of course you have the right to disagree but you are wrong. Most debates are not simple dichotomies, though; people who believe the virus is a hoax have a different anti-vax stance from those who believe the virus is not only real but planned, developed and deliberately released. Those who object because they fear testing has or will not be comprehensive enough have a different view from those who have fallen down the 5G conspiracy rabbit hole.

And it’s not just Covid because, alongside all the conventional battle lines of disagreement have been added a whole regiment of new or revived challenges. Climate change, the plight of the third world, society as a whole and for some, the very future of humankind. But none of these topics stands alone and among your own ranks, fifth columnists muddy the waters and spread uncertainty and disinformation.

Trying to assess just one of the subjects of disagreement, the whole 'let's change our entire energy paradigm' conundrum is far too big, far too complex and far too interrelated to possibly solve without casualties. And as ever, the first casualty has been truth, leaving a gaping vacuum into which pours pure madness! The discussion on green transport rapidly descends into an argument about ending personal freedoms. Attempts to ensure energy security erupt into shouting matches about independent nation states… which inevitably tends towards ‘Hitler’.

As genuine experts and deep thinkers soberly ponder the options, Joe Average wades straight into the muddy puddle with some rant about exploding batteries putting lives at risk, or the fascinating conflation of Saharan dust with potato harvests in Chile. Every line of dissent seems to spiral down into hysteria about the freedom of the individual. This really is the end point; at the bottom of every movement, every cult, every new-age madness the freedom of the individual appears to be paramount. 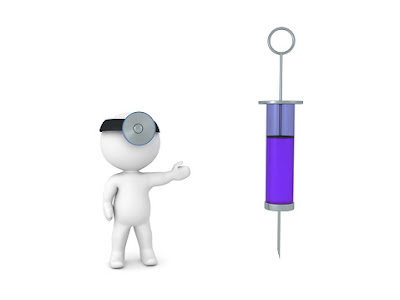 It's just a little prick...

Yes, indeed. This necessarily includes the freedom to starve, to die of cold to be eaten by wolves to succumb to every invisible microbial, bacterial or viral agent out there. The freedom to go it alone against the might of the universe and damn the consequences. Because that is what ultimate freedom brings. The human race is a cooperative species and that is the secret to our success. Thus I have concluded that the freedom of the individual does not trump the needs of the herd and if my herd needs help to fend off disease I will willingly sacrifice any fancy lone hero nonsense and have the fucking jab, okay?