The Politics of Despair

David Lammy tweeted out in glee about Dominic Cummings’s plan to leave Downing Street by Christmas. He referred to him as a rat, which is par for the course for the party which thinks ‘scum’ is a suitable tag to refer to all who disagree with them. Never was this Thomas Sowell quote so apposite: “It is amazing how many people think that they can answer an argument by attributing bad motives to those who disagree with them. Using this kind of reasoning, you can believe or not believe anything about anything, without having to bother to deal with facts or logic.”

If it were only Lammy it would be bad enough but listen to the language from those who imagine they occupy loftier moral heights. While Conservatives often go painfully out of their way to use the right words, to sound reasonable, logical and sound, the left seem to think they have grounds for more embittered attacks. In the USA the ‘Democrats’ (who, ironically, actually have the word rat in their name) regularly invoke the Devil himself when referring to Republicans (who pleasingly have the word pub in theirs).

In the name of saviouristic socialism, people like Dawn Butler liberally sow racist division and enlists the likes of Lenny Henry – a man we want to like, but who makes it so difficult at times – to the cause. Their loathing for white people even extends to calling non-white Conservatives, ordinary working people at that, coconuts, or Bounties. Had a white commentator used an equivalent phrase to describe white people who act black the clamour would not cease until that person had been ‘cancelled’.

But the rub is this; in all the years of social programmes, welfare initiatives, the drive for diversity before excellence and the refusal to accept the necessary duality of success and failure in endeavour, the supposed problems have only got worse. Give people a handout and all you get in return is more hands out. Once they may have said ‘please, sir’, but now it is a demand, often with menaces.

Rather than accept this simple observed truth, that the politics of envy simply creates more envy, they double down and tell the less well-off that the rich are only rich because of greed, connections and some bizarre desire to keep the poor, poor. And like religious acolytes they follow the script at all times until the liturgy becomes embedded. Confronting the clear truth that what makes rich people richer is the masses being able to spend, and spend willingly, would be like effecting an exorcism to cast out what has possessed them

Irony is never far away when doctrinal politics (or religion, for that matter) abounds and the great irony is that once people gain a little wealth they no longer want socialism so it is  a self-defeating dogma, unless… Unless it fails, in which case you blame the failure on the great Satan of capitalism, indeed you make a name for yourself by doing exactly that and then you call yourself Owen Jones, set up a Patreon account and attempt to enrich yourself by banging the drum of despair. 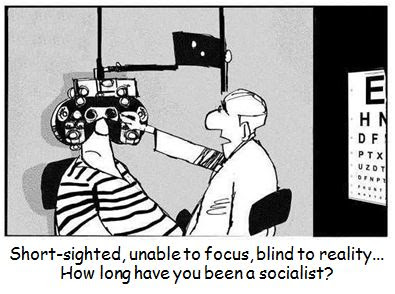 Thus the primary tool of socialism is failure, repeated failure. And what better way to span the generations than to have entire sectors of society who serially fail to improve their lot and pass their misery down to their offspring, then blame it on those who actually pay for their subsistence? It is of little surprise that some of the fiercest advocates of capitalism are former socialists who have made something of their lives. Or as most of us know them, adults.