They say you should never bring up politics, science and religion at the dinner table. So I spent some of the weekend poking the cowpat of faith with the shitty stick of inquiry to see how many flies I could enrage. I ended up watching and retweeting a few videos of such luminaries as Richard Dawkins and Mehdi Hassan, Christopher Hitchens and various ludicrous ‘men of god’ and I was struck by how often the faith communities love to fire off total non sequiturs by insisting that science is itself a form of faith and lacks definitive proof. Dear old Dickie Dawkins gets quite impatient at the suggestion, not without reason.

Religion says “Believe me, for I am the word of the creator of all things!” Science replies “Prove it!” to which religion falls back on the schoolyard response, “No, YOU prove it.” Now the discussion can only proceed along a well-defined path... To the scientist, if god is the omnipotent creator of all things, surely proof that he exists should be pretty easy to rustle up. After all, how much effort would it really take to produce a minor miracle, say an actual answer to a prayer? But, as Jimmy Carr said, “I prayed to god for a bicycle, but then I realised he doesn’t work like that. So I stole one and prayed for forgiveness instead.”

The flood! they cry! What proof? say the scientists. Besides, what about climate change? (Admittedly, some areas of climate change theory are articles of faith themselves.)
God, in his wrath, sent forth plagues and pestilence! What? Your heavenly father, all-knowing, all-wise? Couldn’t he just have smited and be done? And when was the last time he did any judicial smiting anyway?
But he gave his son to be crucified! Oh yes, about that; wouldn’t it would have been way more impressive if he’d just rescued him? You’re saying the best way to prove his existence and rid the world of evil was to have the lamb of god barbecued? We don’t see a lot of saviouring about these days.

Science revels in inquiry which modifies, or disproves theories, sometimes those which have stood for centuries but now with keener minds and greater technology no longer hold to detailed scrutiny. Religion says, hold on, we read the book again after you said all those hurtful things and we now see that he didn’t literally come back from the dead; that was just a metaphor. Science says, don’t bring me your metaphors, bring me evidence, to which religion says... let’s have a gander at that book again and see what we can find between the lines. 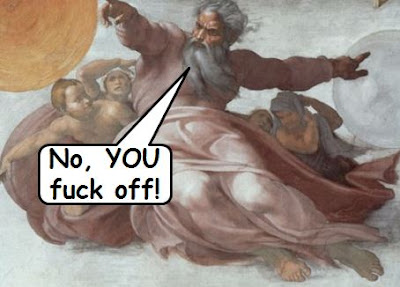 The smitin' days are done!

In the meantime the killing goes on and the happy brotherhood of man carries on daily disproving the existence of that to which he looks to for guidance. It’s little wonder the world is fucked up. The burden of proof still lies with the faithful no matter how many deflective arguments they dream up; re-interpreting a text, itself the product of many men and many revisions, is not proof. Ah, but religion brings hope, they say. Except that it is science which shapes the world. It moves on and evolves and builds greater understanding and genuinely does offer hope that as it solves life’s mysteries, one-by-one it is also conquering all of the ancient biblical terrors.

Science says you don't need a god to be good. It says: we don't have all the answers but we will keep on looking and report back as we find them. It says: little by little we are making your lives easier, longer and more healthy. What contribution does religion make? It says: god moves in mysterious ways.
Posted by Batsby at 05:07