Reds under the beds

Even the noted left-wing comedian Mark Steel has now been barred from voting for Jeremy Corbyn, such is the deperation that has entered this contest. Added to the warnings by Blair, Campbell and Mandelson, a haggard-looking Jack ‘Fuck the English’ Straw appeared on Channel Four to drive home just how terrified the New Labour Louts are by this return to, er, democracy. The people choosing who they want to be leader? Dear god, what next?

But when the good comrade triumphs, Britain will enter familiar territory and balance will be restored as we revisit 1979 and good old left versus right, as opposed to left versus a little bit more left, versus a slightly more centrist than left-of-centre liberal free-market capita-socialism with a hint of left-lurching NHS-Tory thrown in. It’s good to know where you stand. Meanwhile as life returns to normal we will look away from the drama centre-stage and concentrate a little more on matters closer to home...

One morning in Corbyn's heavily regulated surveillance state, where everybody informs on everybody else, the senior IT System Manager of a major British business failed to show up for work and receiving no phone call to inform them of the reason for his unplanned absence, Susan from HR called him on his home phone number. The call was answered almost immediately but instead of a man’s voice, a small child answered: “Hello?” she whispered. In the way that we all instinctively do, Susan lowered her own voice when she asked, “Who is this?” The tiny voice replied, “It’s Polly.”

“'Hello Polly. Is your daddy at home?” asked Susan

“Can he come to the phone?”

Susan was taken aback by this abrupt but firm negative, so she tried again: “Well, is your mummy there then?”

“Well could I speak to your mummy, then?”

In hushed and serious tones, “No.”

Susan was perplexed and thought for a moment. Something was clearly amiss. “Is there anybody else there?” she enquired.

“Oh? Then may I speak to the policeman, please?”

“He’s talking to mummy and daddy... and the Fireman.”

A note of alarm crept into Susan’s voice as she began to ask what on earth was going on but she heard in the background a loud clattering noise, sounding as if it was getting nearer. “What’s that noise?” she almost yelled. 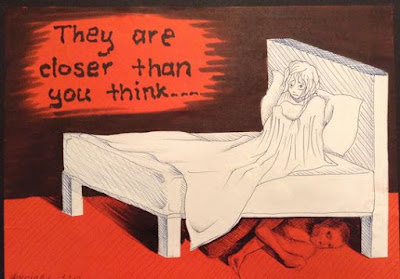 “A helicopter?” Susan was frantic with worry. “What's happening? You can tell me, Polly”

Polly whispered back “The search team has just landed a big yellow helicopter outside.”

“Search team? Oh my goodness, what are they searching for?”

Polly tried to stifle it but her muffled giggle turned into a snort and then a raucous guffaw as she said “ME!”
Posted by Batsby at 07:20