There is nothing to suggest this isn’t the Daily Mail’s standard fare of cooked up, rabble-rousing reportage but the story about Italy and France [literally] fast-tracking migrants across the continent is bound to have raised the blood pressures of many a Brit: Free train rides to Calais. If this is anywhere near true – and the current appetite in Britain for it to be the case is off the scale – it is surely a signal that the old enemy still harbours animus for its most successful neighbour. Bonaparte may have had an empire, but it paled against that of Victoria. And apart from the recent unpleasantness with the pantomime villains of the Third Reich nobody else has come close.

They may not envy our food, our climate or our fashion– although they are are absolutely fine thank you very much (Our sausages are more honest than the wurst of Germany, our cheese is as cheesy as any in France, we have sartorial insanity to rival Milan and I defy any human in the world to find fault in a mosquito-free, bright summer’s day in the Yorkshire Dales.) but they have always coveted our separateness. Now to save you the trouble I have been on Google Earth, examining our border fences and guess what? Yup, we have none; we don’t need any. It turns out we are an island nation; who would have thought it? Well Shakespeare for one, lest we forget:

This royal throne of kings, this sceptred isle,
This earth of majesty, this seat of Mars,
This other Eden, demi-paradise,
This fortress built by Nature for herself
Against infection and the hand of war,
This happy breed of men, this little world,
This precious stone set in the silver sea,
Which serves it in the office of a wall
Or as a moat defensive to a house,
Against the envy of less happier lands,
This blessed plot, this earth, this realm, this England.

An invasion of any kind is to be repelled and we’ve been experts at it for centuries. The last invasion from France was almost a thousand years ago and in that time we have kept at bay all manner of flotsam; hell, we even eradicated rabies by the simple act of policing our natural border. But this ‘swarm’ has becoming the most feared invasion of any because it is by our own invitation. Regardless of whatever pieces of paper successive ministers have signed without consultation with those affected this migration is just not wanted and ignoring it, as David Cameron is effectively doing, is helping nobody. 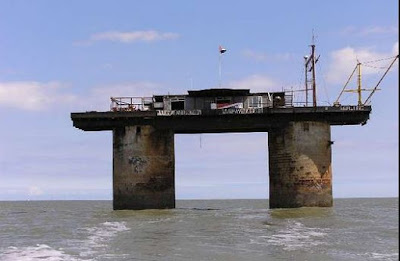 The migrants may not harbour evil intent but they are unwitting conscripts in the European Union’s war on an independent Britain. Soon the clamour for an EU-wide solution will be so loud that the commissars will take it as an insistence that what the people want is more EU and nation states, unable to act on their own, will acquiesce and give away even more powers. As for the migrants, just watch as the swarm becomes a deluge. We used to be an island fortress; if the EU has its way, soon we may not even be an island.
Posted by Batsby at 07:57