Stand on your liver!

When Moses Miliband came down from the mountain with his stone tablet of principles from who knows what acid-fuelled, socialist unthink tank we all gasped in astonishment before falling about with laughter. Ed himself always appeared to be delivering the message of others more Marxist than he, as he robotically intoned the edicts with a voice that was a gift to impressionists everywhere. He is probably as relieved as his party to be away from the spotlight, but he must be wondering why Jeremy Corbyn is getting away with doing much the same thing.

Iain Dale called JC’s launch of ‘Standing to Deliver’ (and don't you know he's been waiting decades to use that) as the shortest suicide note in history. Corbyn’s plan for a fairer and more successful Britain is a curious concoction of values and policy with the usual lack of detail. Like all left wing economic fantasy he doesn’t ever really get to explain how he will coerce those who don’t share his ideals to willingly share their resources. But hey, who’s to knock the New Ten Commandments?

“Growth not austerity” he declares, with a national investment bank and ‘fair taxes’ for all, which is Labour speak for squeezing ‘the rich’ (that’s anybody not on tax credits) until the pips squeak. He promises “a lower welfare bill through investment and growth” yet with no meat on the bone of this policy, which actually implies far greater state spending, it will inevitably be funded by higher taxation on the good old ‘squeezed middle’ whose only crime is to not be reliant on handouts. But hey, won’t we all benefit from Jezzer’s “Action on climate change”? Given that, so far, the climate change industry has only ever created greater fuel costs and lower fuel security, I somehow doubt it.

Then there are the pure magic money policies. Intent on following the ruinous examples of left wing governments before him JC plans to magically renationalise the railways and the energy sector, control private rents and build enough council houses for everybody by 2025. Somehow he is going to do all that by “no more illegal wars” and not replacing Trident but, oddly, by redeploying the skills of those in Britain’s highly profitable  arms industry in the community. Meals on wheels delivered by drones, perhaps? Or will he sail a nuclear sub up the ship canal to provide a northern powerhouse for Manchester?

Of course, Corbyn is fully committed to saving, nay improving, the NHS with full state funding and a miraculously seamless integration with social care. It makes you wonder why no politician before him has ever even mentioned the health service. Furthermore, his fully-integrated, fully-costed, I-don’t-know-why-nobody-thought-of-it-before package of promises includes the abolition of zero-hours contracts, the stamping out of workplace injustice and – wait for it - equality for all! Add to that, lifelong ‘free’ education, jobs for everybody and somehow “an end to the scapegoating of migrants” in a one-nation Britain and it is surely time to bring out the bunting. 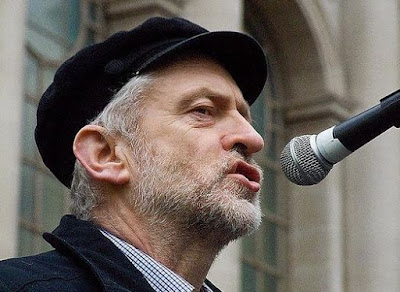 So there we go; Full-Corbyn will bring us a totally novel and innovative, “new kind of politics” and “a fairer, kinder Britain based on innovation, decent jobs and decent public services.” These are exactly the sort of ideas that every other party clearly opposes and so radical are they you would think Jeremy ought to have them engraved in stone. Meanwhile, that noise you hear in the background? It’s the combined hubbub of grinding teeth and middle-class rats scurrying from the sinking ship.
Posted by Batsby at 05:15