Everybody is a bigot. This is undeniably true. Nobody has a mind so open to other people’s opinions that they can smile beatifically and accept the validity of every such differing view without question. You simply can’t survive in the vast herd of mankind without taking sides. Family, village, county, country, football team, political affiliations, etc, etc, etc. We ALL harbour antipathy towards some views and look more kindly on others.

Well, maybe there’s a the odd little, old, white-haired guru who has mastered his consciousness and conquered human concerns, but what use is he, sitting there, cross-legged on top of his holy mountain? Besides, no matter how other-worldly his mien, surely he must be working a scam, no? But put aside such ignoble suppositions and grant that there are a handful of such mystics who can actually practice true impartiality and there are still 7.8 billion of us who are in thrall to bias; possibly the best we can do is accept it and take steps to moderate it.

In these days of lockdown I am spending far too much time on Twitter, exposing myself to the plethora of deadly, infectious, perverse beliefs that inhabit that realm, and in the process I am aware I am reinforcing some of my own entrenched beliefs. I know it is my own biases which drive me to certain conclusions, but there are some quite clear correspondences between certain collective mindsets which may help to explain some of the lunacy out there.

As a big fan of the principle of Occam’s Razor I tend to view with deep scepticism any attempt to add two to a potato and get conspiracy. But there they are, Occam-free disciples of what they think is ‘the bigger picture’. The more likely they are to have been struck done by the Covid-5G connection, the more likely they seem to think that the Conservative government is somehow to blame. Those who harbour antipathy against the current government are also highly likely to have voted to remain in the EU; some of them even signal their delusions by keeping the redundant FBPE hashtag in their Twitter bios.

But one thing which universally seems to connect the more fragile and gullible is the insistence that they, alone, possess the open-mindedness to tell fact from fiction. When this is coupled with the characteristic exchange and response mechanism you can usually predict the outcome. It goes like this:

This is immediately followed by a block because then, see, they must have won the argument. Or at the very least they have protected themselves from yet another source of dissent and wrapped themselves more tightly in the self-reinforcing bubble of delusion. How fragile must be your grip on reality that you cannot tolerate dissent and get so angry with anybody who challenges your unhinged gibbering? 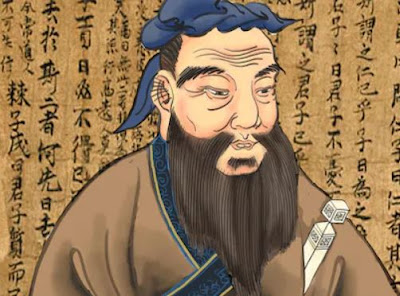 Confucius, he say: Don't eat bat and cat and shit...

Anger is, in my worldview, an immature emotion and one engaged in by people of a less rational bent. There is no need for it and it usually indicates a low-information approach to life. But the knee-jerk blockers are so confused by other people’s lack of anger that even that makes them angry. They seem to even hate the fact that you wish to engage with them in a civilised manner. I find this highly amusing… which is why I continue to do it.
Posted by Batsby at 11:46