Watch, when Ramadan ends, how British politicians will fall over themselves to be the first to say ‘eid mubarak’. See them clamour to be effusive in their praise for every single celebration for every immigrant community in the land. As long as it doesn’t include the English the prominent talking heads of all parties will light up Twitter with competing messages of great joy at the drop of a hat. No matter from where you originated and no matter how little you care for Britain, you can be sure that the people charged with its protection care more for you than even the cultures you came from

There is normally a big shout out for St Patrick’s Day because who doesn’t love a good piss up and a nice fight? Other British patron saints are usually given a polite round of applause. Except for one. The flag of Saint George is the flag of England and is therefore a racist flag for a racist saint, for a country that has been deemed racist by those who have taken it over. At the time of writing I was unable to find a single member of the government who had written even the most cursory greeting although the former Archbishop York, John Sentamu had graciously done so.

So, the writing on the wall is quite clear – some animals are more equal than others. But while we unequal animals still comprise the vast majority of our nations population we do have one thing in our favour – a big voice. We should use that voice, that vote, to retain control of our nation for as long as is possible. And cry “God for Harry, England, and Saint George!” 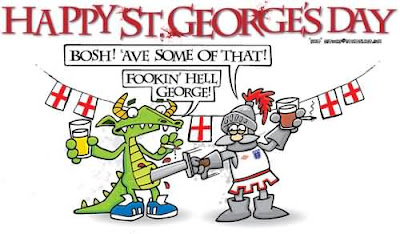 (Although I don’t expect any greetings from fucking Harry, either.)

UPDATE: It is now after noon and a number of 'dignitaries' have offered up their greetings. Some genuine, but some clearly to push the diversity and inclusion agenda: "We are all English now, even those who just washed up on a Kentish beach"
Notable by their absence, however, are the British Army, who nevertheless got in a tribute to ramadan, Rishi Sunak (Chancellor), Boris Johnson (PM. I know he's ill but he managed to talk to the Queen yesterday, apparently) Priti Patel (Home Sec), Dominic Raab (Foreign Sec) and numerous others who, you would have thought, would very much want to keep onside with the majority of our people who identify as English.


FURTHER UPDATE: It took until 13:51 for @10DowningStreet to post a greeting. Dominic Raab retweeted it. At a time when everybody is calling on everybody else to bring the country together, I am not convinced this is good enough.