Planet of the Morons

Michael Moore’s latest documentary - Planet of the Humans - has succeeded in angering many of his usual supporters. Possibly because many of his supporters don’t really understand his point. Whether or not every statistic quoted is accurate is immaterial. Moore hasn’t turned on his audience, although a lot of them should be squirming at the inconvenient truths he has unearthed. His target is still global capitalism and he scored a bullseye; it’s just that being ‘the good guys’ is harder than you thought.

As to those numbers and their accuracy, there is no reliable way of working out what the actual cost of a single wind turbine is, let alone the price paid by the planet. Materials must be extracted, processed, transported, fabricated, assembled, transported again... They have to be erected on site and the infrastructure to support them must be created. Then you need to factor in their running costs – maintenance, repair, replacement, etc – and their end of life disposal costs. Little of these financials are ever considered when the PR departments publish performance figures.

But all of that is comparatively simple. With enough diligent research, one (or more probably quite a large team) could forensically examine the lifecycle of that wind turbine and tot up the numbers. However, this is clearly not in the interests of those who would sell you the technology. When it is claimed that wind and solar are ‘cheaper’ than fossil fuels they conveniently ignore most of the above costs. You may have noticed such claims began springing up over the last year or so, along with the ludicrous nonsense that electric cars will be cheaper to buy than conventional cars within two years. (A budget electric is currently twice the price of a far more useable family diesel.)

What is much harder to cost is the real takeaway from Moore’s film. The destruction of habitat, the displacement of people, the exploitation of heartbreakingly poor communities and the extinction of species is difficult to put a price on, but I’ll give it a go. It is too much. Also, in the case of certain supposedly green technologies, more carbon is emitted in their manufacture alone than is ever offset by their operation. Lest you think this makes me a rabid climate denier, I’m not, but like MM, I am highly suspicious of the way the green movement has been hijacked by profiteers.

Where we differ, I think, is that I don’t believe there is globalist collusion, as such. I don’t see shadowy conspiracies hatched in dark corners. What I do see, however, is how unchallenged markets work; what I see is human nature. The environmentalists lobby governments, infiltrate the thinking of teachers and hence children, spread the message that the planet is doomed (again) and eventually, as with all propaganda, the wider public begin to believe. This belief drives demand for more Earth-friendly products, so suddenly everything that can be labelled green is labelled green. 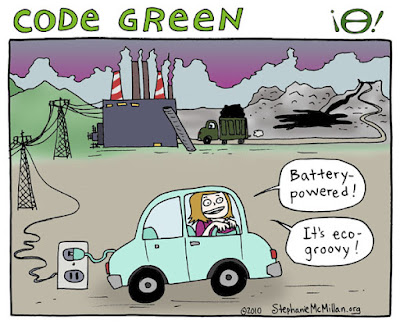 There is nothing sinister about this; this is just the human market working as it always does. As sentiment mounts it affects voting patterns and governments are driven to demand action. And then the big money gets in on the act. There was little profit in expensively developing alternative products for a limited market, but the gains are enormous if you can tap into a global demand for something so apparently wholesome. This process is organic; it is observable and repeatable and entirely human. The coronavirus is thought, maybe, to have originated in a Chinese wet market and experts are trying to find a cure. The voracious human consumption virus is inherent in all of us and if we are the only cure we are very probably buggered.
Posted by Batsby at 10:17

Email ThisBlogThis!Share to TwitterShare to FacebookShare to Pinterest
Labels: Michael Moore on green tech, Planet of the Humans