It’s the end of January and the Six Nations is almost upon us. After the debacle that was England’s performance in the Rugby World Cup last year, we will be hoping for a return to form... just so long as new captain Dylan Hartley can refrain from trying to kill anybody. Unlike its poor relation, footie, rugby inspires lifelong allegiances and a camaraderie between rival supporters that most sports would kill to be known for. As we hunker down and wait for France v. Italy to kick off next Saturday I am reminded of two old lifelong friends and staunch fans.

Mike and Joe, in their nineties had been besties ever since they both made the school first fifteen and have been fervent supporters of their local team. When it was diagnosed that Joe was in his last few weeks of life, Mike was determined to visit him every day. And he was true to his promise; every morning Mike would sit and chat as his dear old buddy wasted away before his eyes, his breath shallow, his eyes grey-lidded and sunken, but still with a fierce glimmer as he clung on..

One day Mike said "Joe, we met through rugby and have both loved the great game all our lives. We played rugby on Saturdays together for so many years and we went on some epic tours.” Joe looked up from his bed and smiled, weakly. Mike went on: “The thing is, Joe, if there’s a heaven they must play rugby there, right?” Joe made the thumbs up and grinned. “So, I have a favour to ask. When you get to heaven, somehow you must let me know if there's rugby there."

Joe looked up at Mike from his death bed, cleared his throat and whispered hoarsely "Mike, you've been my best friend all my life. If it's at all possible, if there’s any way, of course I'll let you know." And with those last words, Joe passed from this world. Mike said a quiet farewell to his old friend, called the nurse then with a heavy heart he slowly made his way home. It was going to be an emptier world from now on.

That night, shortly after midnight, Mike was startled awake by thunderclap and a blinding flash of white light which faded into black as quickly as it had manifest. He sat up in bed – moving more suddenly than he had in years - and then from the darkness he heard a voice calling his name: "Mike! Mike!"
"Who is it?" he demanded of the dark, "Who the hell is it?"
"Mike, it's me, Joe."
"It can’t be. Joe just died."
"I'm telling you, it's me, Joe."
"Joe! Where are you?"
"In heaven," said Joe’s disembodied voice. "I have some good news and some bad news."

In the dark, Mike thought about this for a moment before saying "Tell me the good news first," says Mike.
"The good news," replied Joe, "is that there IS rugby in heaven.”
“I knew it!” said Mike.
“Even better yet,” said Joe, “all of our old friends are here, too. we're all young again, it's always spring time and it never rains or snows. And, best of all, we can play rugby all we want, and we never get tired!" 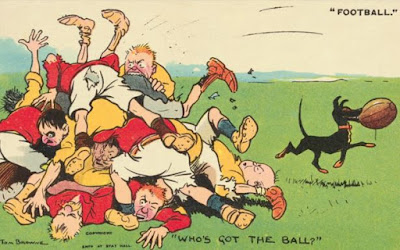 "That's fantastic," said Mike. "It's beyond my wildest dreams! Thank you, old friend for letting me know.” He paused for a moment to ponder the news then remembered: “So, Joe, it sounds wonderful, but it can’t be all roses; what’s the bad news?”
Joe’s voice came again from the dark: "You're in the team for this Saturday."
Posted by Batsby at 05:29