An interesting article by Anne Marie Waters in Breitbart a few days ago perfectly explains the perverse Newspeak of the forces of mother-state socialism and the lust for uniform mediocrity achieved through coercion and not by any natural human mechanism. In Germany of all places, where half the country was for so long a part of a ruthless communist dictatorship, they are busily rebuilding the wall, only this time they want to include all of Europe within its destructive embrace.

It only came down a quarter of a century ago. Are memories so short that European leaders are already prepared to rebuild a failed ideology and defend it by viciously attacking those who speak out? Once again we hear the trudge of metaphorical jackboots and formalised state terrorism marching back into the heart of Europe. This death wish for freedom, echoes the demands of islam and its ‘democracy go to hell’ clarion call. Never mind hell, what on earth is wrong with the citizens of the new Eurasia?

The deafening screech of the massed voices of eternal protest – the left, for whom it is as natural as breathing – overlay every area of life today and anybody who dare challenge their orthodoxy is shouted down. When they say ‘far right’ they mean you and I. It is ‘far right’ to oppose uncontrolled immigration. It is ‘far-right’ to defend the traditional family. And it is ‘far right’ to want to regain independence from the European Union, whose end game is a totalitarianism just as unyielding as the old USSR.

The dupes on the left are brought into line by swallowing wholesale the narrative that they will bring about a gentler, more caring world of inclusivity and equality if they only band together to threaten violence to those deemed ‘far-right’. Like good little Hitler Youth they believe right is on their side and while the rest of us want peaceful coexistence, the multicultural mantra demands special concessions from us towards people who have no intention of ever integrating. The only way to live with people who hate us is with as great a distance between them and us as is possible; that goes for the left as much as it does for islam. Europe belongs across the Channel.

David Cameron may believe he is cleverly exploiting our fears by pretending that invasion is imminent if we leave the EU. Having tried and failed to make the economic argument which few now believe and realising that the left-wing approach of insulting us all as ‘the far right’ was making little headway against the intelligent, he has gone full-1984 by stating an outright lie as truth. War is Peace; Freedom is Slavery; Ignorance is Strength. Taking back control of our borders, he says, is losing control of our borders and brooks no reason. 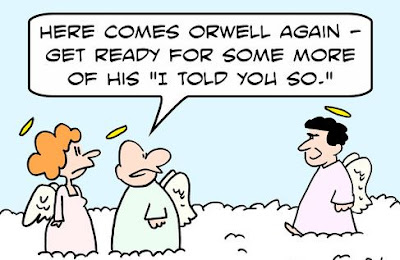 This referendum is Cameron's to lose but he is relying on fear to win the day. There are no hard facts in the EU debate; nobody knows what leaving will bring, but it is the only option which offers change and goodness knows we need a change. I’m going with the ‘far right’ option of free speech, free thought and freedom from foreign rule, otherwise what’s the point? But, just as Anne Marie Waters explained, I never expected a fair fight.

PS: The French have also called Cameron a liar.
Posted by Batsby at 05:22