Trump trump trump! Before you jump to any ill-advised conclusions, Donald Trump is not the elephant in the room.  Everybody’s talking about him. From the early hours of yesterday on LBC through the morning’s Today programme on Radio 4 and then throughout the day the news that The Donald didn’t win the nomination in Iowa was trumpeted with undisguised glee and his supporters dismissed as bigots and racists and dangerous simpletons. Trump himself has had to endure bile that would provoke any left-wing politician to call the cops. He had it coming, said Yahoo!

Now I’ve never liked Donald Trump, the man, from what I’ve seen of him over the years; brash, vainglorious, ridiculous hair, vocally incontinent and certainly no diplomat. But, as a politician, the way the left has reacted – employing an ideologically based hate campaign against him – is not only reminiscent of the Nazis, it smacks of real fear and loathing. And all of that visceral antipathy transfers straight to his supporters. The left fear nothing as much as they fear the will of the people and rather than try to win on their own terms, they instead revert to tried and tested, negative campaigns of discreditation.

On this side of the Atlantic, of course, the establishment hate figure is Nigel Farage, who despite two decades of personal sacrifice in a cause he believes in and despite his millions of supporters, is portrayed by that same establishment, without any apparent intended irony, as a fascist demagogue. And yet the support for both Trump and Farage is not some enchantment they have cast over the stupid; they are both simply saying what the entrenched parties won’t. And there are very many more, besides, who while not intending to vote for either man, know that the old parties offer no hope for change.

On both sides of the Atlantic the establishment is fighting for its life. The settled order is under real attack from both left and right – Bernie Sanders, Donald Trump, Nigel Farage, Jeremy Corbyn – and the desperation is showing. Corbyn’s election in particular has rattled the centre-leftists of the old-New Labour, which is hilarious of course, but all now seem to be semi-united against a common enemy. David Cameron. Cameron has gone full Ken Clarke over the EU and to prove it he is hailing his we’ll-think-about-it proposal to the other EU states as a victory when even the Daily Torygraph knows it’s a sham.

This upcoming referendum is nothing whatsoever to do with minor details; it’s not about emergency brakes, migrant benefit caps etc. In fact where have we got ourselves when protecting benefits is the greatest concern? Nobody, anywhere, should be living off the state unless they simply cannot fend for themselves and nobody should have the choice to sit on their arses and expect a comfortable living. Immigration has distorted the labour market, the EU socialist federation has distorted domestic politics and multiculturalism is steadily eroding national identity and eliminating indigenous cultures; what the fuck is wrong with socialists that they actually want more of this? 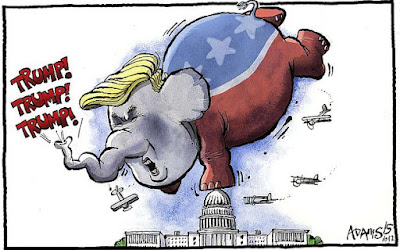 It is time to reject the impossible dream of the European National Socialist Party and its enforcers. It’s time to stop pretending that we need the EU. And it is long past time that we took back politics for the benefit of the British.  Thankfully, across social media, the voices for remaining in are muted while there is near-universal contempt for Cameron’s handful of magic beans. Whatever you personally think of them we need the Farages and the Trumps. And as for 'The Donald', I personally hope he doesn’t pack his trunk and say goodbye to the GOP circus. We need all the fun we can get.
Posted by Batsby at 05:17