Yesterday ‘Deal-or-No-Deal’ Dave had 24 hours to come up with an agreement to be presented to a bunch of countries who have no real interest in negotiating Britain’s relationship with the EU. Today, he probably still has 24 hours; time is elastic in political crises. But over the last few weeks of talking about it most of us have forgotten what he said he was setting out to achieve. Does he have a raft of powers to be handed back to the UK Parliament? Wasn’t there something in there about limiting migrant numbers? I really don’t remember.

Actually that’s not altogether true – I do have a vague memory of a list of four key demands he set out to argue, three of which we effectively had control over anyway and the fourth was some inconsequential smoke and mirrors about paying migrant benefits which appeared to have absolutely sod-all to do with restricting free movement of people across our borders. While there is a natural focus on the Calais swarm, without having control over our borders the hundreds of thousands of new ‘EU citizens’ invited in by Angela Merkel will quite soon be able to come here without challenge.

But what does David Cameron really want? If it’s legacy then staying in the EU isn’t one; it is just, really, doing nothing. Oh there is much chatter around the reported desires of the other EU countries for Britain to remain onside but haven’t we always been a thorn in that side? Some say untying the Gordian knot that represents our involvement in Europe will take years. I say, take a pair of scissors to it, set fire to it, hack at it with a machete; the mooring ropes will still be there, we would not be setting ourselves adrift. Britain has been a part of political Europe for centuries, forming allegiances, breaking them, inter-marrying our royalty. None of that will change. Just as before, we can advance or retreat at will, not as pressed men.

There is nothing, I repeat nothing, which we get from our part in the EU that we couldn’t have as an independent wealthy nation. And there is much we would gain from having the ability to set our own course. Will we still be friends? I see no reason why not. Would we still cooperate on defence, justice, financial and other issues? Of course we would. But without total control of our own perimeter and policies we are not a sovereign nation and nothing less should be on offer.

Lest you are inclined to give him the benefit of the doubt the Conservative Home website lists ten negotiation aims Cameron has dropped:
All gone, forgotten, crumbled into dust... 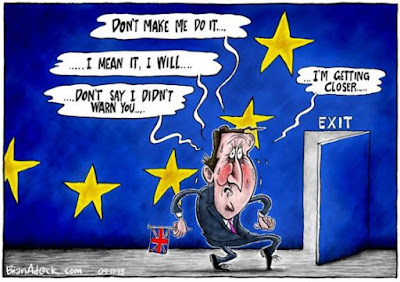 In the end he has asked for nothing and been turned down. Pursuing Britain in a reformed Europe is a strategy that will make him the new Ted Heath (remember how well respected his footnote in history is?) The only hand that may yield a worthwhile result is the genuine threat to lead Britain out of the EU. In that game all the cards are on our side. We can easily do without the EU; can the EU survive the next turbulent decade without us? But it seems Cameron would sooner fold than do the one thing that would actually earn him a deserved place in history.
Posted by Batsby at 05:03