A touch of Qatar

On the radio yesterday I heard an intriguing discussion regarding Qatar’s hosting of the world cup in 2022 and why this should not be allowed to go ahead. It largely concerned the hundreds of deaths of ill-treated migrant workers who had no health and safety precautions and lived in conditions that European nations would not allow for animals and how Qatar had bought the cup from Sepp Blatter and his band of merry muggers. The scale of the FIFA extortion racket run by Blatter and his corrupt chums is astonishing but it should come as no surprise when a wealthy nation seeking acceptance comes into contact with a committee only too happy to accept.

The plight of migrant workers is a familiar one: Promised employment they leave their homes in India, Pakistan, Nepal, etc. and travel many miles to a strange land where they are treated as slave labour, doing the jobs the locals won’t do for a pittance, with no security and little in the way of the sort of rights most of us take for granted. No security of employment, no guarantee of income, no healthcare, few facilities and none of the home comforts that even prisoners in western jails enjoy. The human rights lobbies of ‘civilised’ western nations have much to say about all this.

Meanwhile, in Britain, Germany and France we also import workers from poor countries to do the jobs our over-stuffed, over-privileged, unskilled idle consider beneath them. We exploit migrant workers because they will work for so little and endure what we might think of as privations in lifestyles, just because we can. Then we allow them citizenship, whereupon they, rightly, demand the same as we afford to those they displaced. As long as a worker is working, even for minimum wage, you could argue they are contributing. But then we give them tax credits, free healthcare, education and those all-important human rights and unlike in places like Qatar, they never go home.

Apologists for this state of affairs say we have no other choice. Our own people won’t do the work we expect the incomers to tackle. But then, in their turn, the children of those immigrants benefit from education in the way our own underclass doesn’t. They get better jobs and then we have to import yet another wave of low-skilled, low-wage workers to do the dirty jobs. But while high-skilled, highly paid and taxed foreign-born workers are an asset, the vast majority are perpetuating a lie; we simply cannot afford - financially and morally - to pay benefits to those we can’t deport, while allowing a flood of desperate incomers to depress unskilled wages still further, giving our shirkers the excuse that now they can’t even afford to take those jobs.

Sooner or later the net-contributors will be unable to support the takers without the rich-poor gap getting ever wider with the consequent malcontent. If we can’t make everybody happy, why not try a little less carrot and a bit more stick? And as we won’t deny foreign-born labourers their human rights, like Qatar, we need to turn our attention to our own. When I was a kid we looked forward to the harvests; spuds, greens, beet, strawberries. We actively sought out backbreaking work in muddy fields because without specific skills we could still make money by grafting. Earning your first wage should be a triumphant moment however you have come by it. I used to regularly stand in a mob of teenagers, clamouring to be selected to pick up discarded race cards, food wrappers, bottle tops and broken glass, often in the rain, following meetings at Thirsk Racecourse. I never for one moment considered that getting dirty, or bleeding a bit was beneath my dignity. 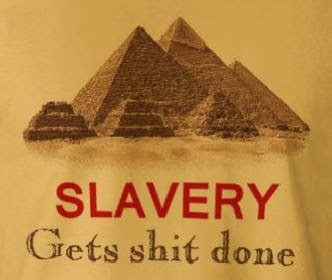 If brown people can do it, why can't you?

It has to be time to break the cycle and sod dignity anyway; anybody can clean, carry, push, pull and generally grunt their way through menial work. And acquiring the work ethic is the most important skill you can have. A life on benefits can never be seen as an option if you are able to do something, anything, else. And if better paid work is beyond your reach you can always pass on that experience to your kids and urge them to strive for better. I don’t want to make foreign gang-masters rich, neither do I want a low-skilled, race to the bottom economy, but if we want to make work pay we have to stop paying people not to work.
Posted by Batsby at 06:52