I wouldn't start from here...

As the old joke goes, O'Reilly, when asked for directions would reply, "Now, Oi wouldn't be after startin' from here..." Cue much hilarity.

I have to wonder if France's new president, Francois Hollande's real name isn't perhaps Frankie O'Lande given his perplexing grasp of the nature of money. It's like Socialist Economics 101.

He wants to raise super-taxes on the creators of wealth, then splurge it on the feckless. He says he is 'anti-austerity' and 'pro-growth' which are meaningless and contradictory phrases, especially in the face of the catastrophic market reaction to the news of his election. He wants to levy financial transaction taxes but simultaneously and "openly describes himself as an 'enemy of finance', [and] said he would make his antipathy towards the City of London clear."

So, in other words he's going to declare open war on the people who dare to bring that horrible prosperity stuff, then expect them to stand still while he extorts it back from them. Without turning France into a barbed-wire fenced open prison I fail to see how that's going to happen. (Every WWII movie set in France seems to have at least one scene where border guards demand "Papers!" in a German accent)
Frankie's grand plan then, if I'm reading this right, is to drive out the people who make the money yet somehow take the money they won't be there to make and redistribute it to 'the poor' (along with some cake, presumably) who will then spend it on... well, what, exactly? Who will be left with the capital, resources and skills, the vision, drive and cash-flow to make and distribute the stuff his newly purchased electorate will want to buy? Who will pay for the enlarged state machine, which will be the only employer left in town?
So wouldn't you want to be a fly on the wall as this Gallic charmer meets David Cameron intent on telling him what a scumbag he is, what scumbags the British are, what Euro-taxes he is intent on pursuing to bring about the demise of the City of London and then, in the same breath, demanding that we in Britain turn out our pockets still deeper to shore up the fatally crippled and universally hated Eurocracy. 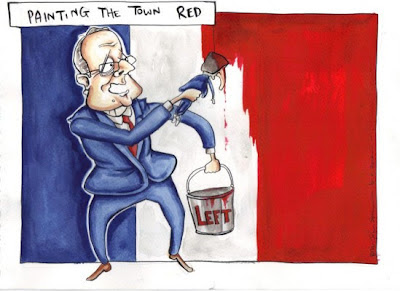 If I was David Cameron I would have to ask him, "Jaysus, are youse absolutely sure you want to be startin' from here?"
PS: Can you show me the way to World War Three?
Posted by Batsby at 05:28