In my day job I try and play a positive role in maintaining the competence of workers in a pretty straightforward field. Electrical installation work isn’t exactly rocket-surgery[sic] and since the first days of the Wiring Regulations (1882 - 130 years) testing has been a necessary component of the job, yet most practicing sparkies have only a rudimentary grasp of the principles.

Last night I was assessing a supposedly experienced tester. Once the test rig had been safely isolated I left him for ten minutes to get on with it and returned to find nuts and bolts, springs and things, popping and fizzing round the exam room while he wrestled with deadly killer croc-clips and test leads.  It was like a kitten with a ball of wool… and a stick of Semtex. Given that an absolute minimum of dismantling should have been involved, this was like Armageddon; Electricalypse.

Once the fires broke out, I decided to terminate the assessment, enough is enough. His blackened eyebrows still sparked and sizzled slightly and a wisp of smoke rose from his new Afro hairstyle... “How did I do?” he asked, hopefully. 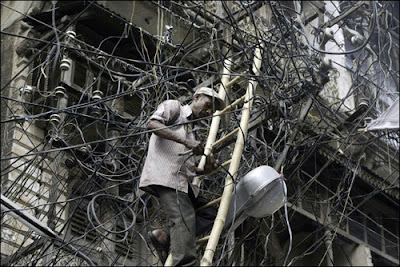 When you hire an electrician you’d like to think they know what they’re doing, wouldn’t you? Most of them have an impressive sounding list of qualifications but the simplicity of Ohm’s Law is lost as they struggle with the deep and complex relationship between Volts and Amps and Ohms. Yet, it’s easy enough to remember:

The truth about electricity

If few of these trained professionals can really tell their amp from their elbow, how can they be expected to tell a talented politician from a mere chancer? Or distinguish between a plan for economic doom versus commercial boom? These are the people who choose, once in a blue moon, who gets to make the important decisions as to just exactly how much more money we're going to piss down the European drain. Or to what extent we will continue to emasculate our armed forces. Or how much more of the third world's population we plan to crowd into our precious little island home.

One-man-one-vote democracy doesn't seem such a good idea now, does it?
Posted by Batsby at 10:40