It's the stupid economy!

I’m not going to get embroiled in all the emotive hoo-ha that is Jimmy Savile’s dubious legacy. Nor the bereavement machine rumbling into mid-Wales right now. That’s dodgy ground for other people to dig over, although I would question the morals of a society so prurient as to want to know all the grubby details, all the time. Really, society? You really want to go down that route? All the best with keeping your own family skeletons firmly in their cupboards, then.

Nope. No way José. Instead, we’re going to do economics. Again.

Much chatter on the LBC 97.3 FM this week about paying mums to stay at home. The whole business of child benefits and fiscal social engineering aimed at procreation is simple idiocy. That’s not how economics works and we know this policy area is doomed simply because Harriet Harman likes it so much.

It’s very easy really, the price of a ‘good’ is dependent on simple supply and demand. Demand is driven by one of two things, need and want; stuff you can’t live without and stuff you THINK you can’t live without. And it doesn’t matter how much you desperately WANT children, it is absolutely, unarguably true that you will not expire for lack of them.

In fact, people want to have children so much there is absolutely no need to pay them to do it. They will do it all by themselves, sometimes without even realising it, often without thinking it through. At the moment our supply line is overflowing with excess product spilling out all over the place. But it’s worse than that. The state paying more than market value for production encourages most those who are unfit producers. So, the market is flooded with an excess of such poor-quality stock we actually have to import foreign labour.

As a result, the monetary worth to the country of a new child, is negative. In fact, over its lifetime it will cost many hundreds of thousands of pounds of taxpayers’ money. That’s Socialist economic intervention for you.

In the same daft vein a gentle lunatic we tolerate on Twitter last night suggested – nay demanded – that the minimum wage should be £20 per hour. Well, in time it will be, either by diktat or by inflation. But, here’s the thing, when the minimum wage is £20 a loaf of bread will cost you a fiver.

The moral of this tale? Simply that if you rely on the government to make your life comfortable, you will end up with the government controlling your life. You don’t like Tesco? Don’t patronise them. You want to earn more? Make yourself a more desirable product. You want freedom? Then go out and get it. But if you expect the Labour Party to come good on Miliband’s ‘One Nation’ pledge then you’ll get exactly what you deserve. 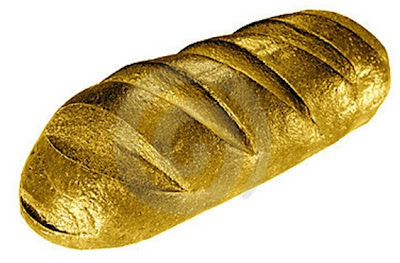 Golden Bread - The Loaf of the Future!

I did say there would be a test.

The minimum wage is raised to £20 per hour. Does this mean