A moment of silent reflection

Some days there really is nothing useful to say and no way to say it gracefully.

"May you live in interesting times", goes the supposed Chinese curse. Having grown up through the sixties and seventies and seen at first hand a country pulling itself apart, then pulling itself up by its bootstraps in the eighties and nineties, then spending itself into destruction at the turn of the century and now, pulling itself apart once again, I feel we must have been so cursed.

Looking beyond our borders, from the end of the cold war, in which we trembled at the dread fear of assured mutual destruction (which turned out to have been illusory propaganda ) we ushered in the supposed end of murderous Communism, brought down the Berlin Wall and cheered the onset of world peace in our times.

The minor and major atrocities, inconveniences and unhinged demands of assorted groups of dangerous nutters and fanatics: Baader Meinhof, Black Panthers, Branch Davidians, Khmer Rouge, ETA, Shining Path and closer to home the IRA and UDA rumbled on then seemed to quietly dissipate as the interesting times almost, almost came to an end.

And then out of the blue, the anachronistically named 9/11, followed by 7/7 (which is much harder to get the wrong way round) and a resurgence of Middle Eastern and Asian sub-continental violence defining the rise of another ill-formulated threat driven by pure hatred and deeply-ingrained ignorance. North Korea, too, now flexes its muscles and postures to The West. And alongside all of that the rise, once again, of localised malevolence within communities - schoolyard shootings and other killing sprees and rampages of whatever the hell to fuck are you doing and why?

Then yesterday, the cold near-to-home shock of the Boston Marathon bombing.

While Boston mourns its dead, one of our own is laid to rest this morning. Whatever ill you think of her, whatever cruelties you wished on her in life, you only have to look a short distance afield to see what real  terror is and what true evil lurks in the human heart. Whichever version of her life you choose to believe, you can't point to killing fields, suicide sects and mass graves enacted in her name. Be careful who you cheer on today, be mindful of what you do, for the second Chinese curse is said to be "May you come to the attention of those in authority". 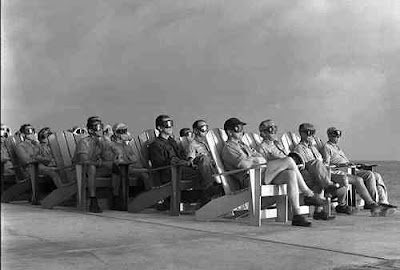 Ringside seats for the end of civilisation?


And the third Chinese curse? "May you find what you are looking for." The world is a dangerous enough place as it is. Today, as Big Ben falls silent, do likewise and be careful what you wish for. Me? I'm saying nothing.
Posted by Batsby at 06:12