So it turns out that people in high office are not necessarily good at their jobs; who would have thought it? Unlike mere mortals the ‘punishment’ for failure at Portland Place appears to be banishment with a sizeable payoff and a pension that 99.9% of the population could only dream of. And better yet, they manage by a supreme mental contortion to cling to the belief that ‘they are worth it’.

At the sitting of the Public Accounts Committee yesterday, ex BBC Director General, Mark Thompson brazenly insisted that the BBC actually saved money by sacking senior people on gargantuan redundancy terms and then expensively hiring successors. Meanwhile the TV-Tax payers have been blissfully unaware of any of this because few of these appointments have any impact on what we see on the telly-box. The hard work, as ever, is done by the grunts on normal wages.

Margaret Hodge, presiding over the festival of outright lies, backstabbing and bluster, summed up the day by referring to a culture of incompetence, lack of control and covering of backs. You could almost imagine a hard night at the shredders looming, disposing of evidence as quickly as they distribute the licence fee take among their friends. Because, make no mistake, this is public-owned industry and cronyism writ large.

While the senior executives of private companies live in fear of upsetting their shareholders, the shareholders of organisations leeching off public money – that’s you and me - have no say in how their billions are disposed of. But it’s okay, you see, because pissing it down the drain is, as Thompson asserts, a saving. This must be the same thinking behind ‘retiring’ senior local authority officials then hiring them straight back as consultants on twice the pay. Yes, I can see how that must cost much less…

In the same vein this also explains cancelling our aircraft carriers then reinstating them, spending billions developing but not adopting missile systems and of course inviting hundreds of thousands of unskilled labour to keep our breeding stock safely at home, watching daytime shows, ironically having their licence fee paid by those of us who have no time to watch television. Oh yes and paying foreign firms to plonk down windfarms wherever they wish with guaranteed returns courtesy of the dwindling number of people who continue to pay tax in Britain. 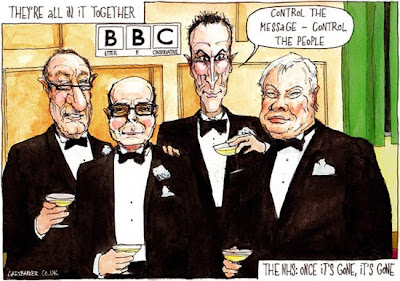 I can’t wait for the Labour Party Conference when we’ll learn – finally – about their policies to rebuild Britain. I’m sure they’ll take Mark Thompson’s wisdom to heart as they explain how doubling our borrowing will make the nation richer; how increasing unrestricted immigration will create jobs and wealth for all and how throwing more money at the NHS will make A&E even busier and therefore, by implication, more successful. It all makes sense when you stop struggling and learn to love BB, see?
Posted by Batsby at 07:49

Email ThisBlogThis!Share to TwitterShare to FacebookShare to Pinterest
Labels: BBC