"In a cavern, in a canyon,
Excavating for a mine
Dwelt a miner forty-niner,
And his daughter Clementine"

Ah, the good old Forty-Niners. The great Gold Rush actually began in 1848 when California was a peculiarly lawless place. On the day gold was discovered at Sutter's Mill, California was still technically part of Mexico, under American military occupation since the newly ended Mexican–American War. Gold diggers began to trickle in and stake claims in often remote places. Ramshackle new towns sprang up to serve the needs of these hard-living men.

One baking hot June morning a dusty prospector ambled into town, weighed down with his bags of gold which he exchanged for dollars at the heavily fortified bank. Then he made his way over to the only other substantial building, the saloon, sat himself on the barstool and waited impatiently to be served. Soon the bar tender attended him and asked what he’d like.

“Whisky!” demanded the grizzled mountain man, “Best you got. And get me a cee-gar!”

The barkeep un-stoppered a bottle and poured out a very large measure of the amber water of life, then took an enormous cigar from the humidor, trimmed the end and held out a light. The prospector downed the whisky, accepted a top up then sat back with a sigh to enjoy his cigar. The barman smiled, topped him up again and asked if there was anything else he could do for him.

“Can you get me a woman?” asked Grizzly. In those early days few cat-houses had been established and loose women had yet to be let loose in the Wild Wild West. The barman looked rueful, beckoned Grizzly to come closer and said, sotto voce, “I cain’t get y’a woman, stranger, but I can make arrangements for you to spend some time with Jake.” He indicated the scrawny pot-wash boy, leaning on a broom in the corner.

The slightly drunk prospector was enraged and drew himself up to full height to address the bartender. He leaned over the bar and said in angry, measured tones. “I ain’t that way!” before striding unsteadily out of the saloon and back up into the hills where he laboured away for three months straight. In late September he shambled into town and retraced his footsteps; bank then saloon. Settled with a large measure of rotgut whisky and nearing the end of a giant cigar he once again enquired after the availability of a woman. Still no joy, but the barman assured him a session with Jake could be arranged if he so wished. On the quiet.

“I told you before,” said Grizzly, “I ain’t that way!” And with that he left, but not before he’d given scrawny Jake a second glance.

January arrived and high in the hills the snows came from heavy skies, but down in the town the womenfolk were still nowhere to be seen. Our hero, bent-backed and bow-legged dragged his weary, cold bones over to the bank then trudged with no spring in his step towards the saloon. In the chilly midwinter he was surprised to see it almost empty. Many had made their fortunes and left for the coast; some had perished working their claims. He strode up to the bar.

“Whisky! Cigar! And god damn it, git me a woman!” He glanced nervously towards Jake as he said this.

The bartender finished polishing a glass, slung his towel over his arm and poured a stiff one. He procured his finest cigar, snipped and lit it. He watched Grizzly drink and puff for a minute before making a conspiratorial lean toward him. “Still no women, brother… you want me to fix you up with Jake?” The prospector paused a moment, then nodded almost imperceptibly. He reached out and grabbed the barman’s arm and whispered. “If, you know, if I go with Jake there, who will know about it? Because I have a reputation in these parts and I ain’t that way.” 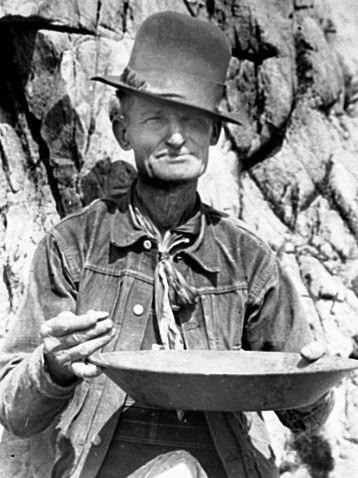 The bartender reassured him, “Why, it’ll jest be you, me… and the other four guys.”

“What?” Grizzly gasped, “Four other guys? Why in the hell do they need to know?”

“You'll need the other four guys..." said the barkeep "because Jake ain’t that way, either.”
Posted by Batsby at 00:42

Email ThisBlogThis!Share to TwitterShare to FacebookShare to Pinterest
Labels: Jake and the other four guys