I grew up in a Britain which, having expended its last gasp in defending the free world from Nazi totalitarianism seemed to slump and give itself up to Soviet totalitarianism. The unions called the shots and gave the working man – a man who formerly had to fend for himself – the impression that he and his comrades held the keys to the country. They did, but only in the sense that they turned the lock at the beck and call of their shop steward masters. Collectivism turned out to be a powerful voting bloc but did little to truly improve the lot of those with only their labour to sell.

Fortunately, for a while, their labour was in high demand, until uncompetitive practices eroded what was left of Britain’s manufacturing base, business owners sold up, packed up and took their savings away from hideously punitive taxation and for the best and brightest of our scientists and entrepreneurs the lure of the swirling maelstrom of the brain drain proved too powerful a pull. By the seventies Britain was dead in the water but by then the lumpen proletariat was seduced into believing that it was the responsibility of the state, not the individual to make everything better. So much for the blitz spirit.

Until the brief respite from the maudlin, state-teat suckling mind-set brought about by the inspired and principled leadership of one strong woman Britain was heading in only one direction. The eighties saw the bitter struggle to wrest back individualism from the morass of mediocrity that insisted for every aspect of life ‘the government must do something’. You still hear that cry tday, but thankfully Gordon Brown’s little dalliance with Old Labour was brought to an abrupt end when once again Labour left us bankrupt. Even if it had the will the government no longer has the means. “Can we fix it?” asks Bob the builder. No, we can’t.

So it was with both pleasure and surprise that I listened to Monday night’s radio programme “Generation Right” which posed the question: Are the political views of young people shifting away from tedious lefty expectation? Surely, you might think, this is the selfish ‘me’ generation - Thatcher’s children? But no; aged between18 and 30 their views and for some, almost their entire lives, have been shaped during new Labour’s bizarre mix of Thatcherism-lite, multiculturalism and spend-spend-spend. Defining themselves differently from their parents’ generation these hip and happening kids appear to have fallen out of love with the welfare state.

Less tolerant of entitlement culture, they want to make something of themselves and have an individualised outlook on life and a firm belief in personal responsibility. Some of those interviewed were even perfectly happy with university tuition fees yet they still hold liberal views on many social issues and are not entirely selfish. It’s not that they don’t care about others but their whole lives have been lived witnessing state intervention getting precisely nowhere. A generation that doesn’t trust the government to solve their problems is a step in the right direction. 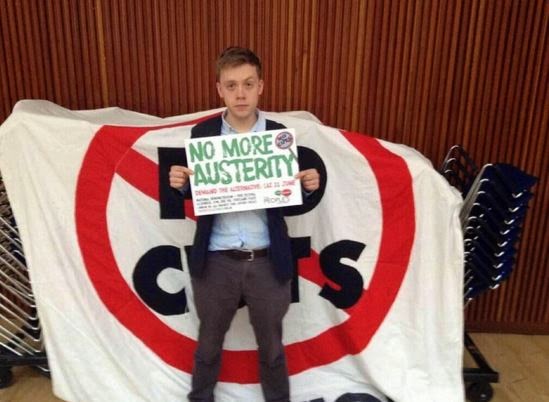 You're on your own, Owen

Meanwhile the Labour Party’s schtick has centred for four long years around the statement that the out-of-touch government just doesn’t get it, praying all the while for economic disaster to deliver the cold and hungry vote back into their sticky, crime-red hands. The welcome news that the cost of living is now the lowest it has been since 2009 must have come as a bitter blow to Red Ed and his motley crew. Yet still they chant their empty slogans and offer up sound-bite solutions to non-existent problems. As Owen Jones andhis People's Assembly demand, “No more austerity!” the rest of his generation open their eyes and ask “What austerity?” Good for you, young folk, spread the word; there’s hope for you yet.
Posted by Batsby at 05:24