Well I, for one, am happy about Ed’s conference speech. He very clearly laid out what all non-Labour voters have always suspected; the utter contempt in which the private sector is held and the total lack of understanding of how society, any society, functions. Unless you believe in anarchy – and that bizarre notion seems to be a perversely unique preserve of people with otherwise left wing views – nobody objects to contributing a portion of their earnings towards the public purse.

Nobody on what they insist on referring to as ‘the far right’ - which is shorthand for anybody not employed by the state, anybody getting by without claiming benefits – wants to destroy the NHS, but people who often pay for their own healthcare anyway and take care to lead generally responsible, healthier lifestyles – are increasingly fed up with their contributions pouring into the bottomless money pit the current NHS represents. The third or fourth largest employer on the PLANET? Are you insane? You would have to be if you think a relatively small population in a formerly heathy, fully developed nation needs a medical system costly enough to care for all of Asia’s teeming billions.

All that successful people ask is that their tax money, from which they get little direct benefit, is spent wisely and that they are left to spend the rest how they wish. They’ve earned it, after all, by adding value to goods and services and creating true profits in a way the state never has and never can. The state is entirely paid for by private money. And that includes the wages paid to public employees and the tax they then levy on that. If you work for the state you pay tax on the money that has already been collected in tax. You are bought and paid for by the private sector; and some of you are paid to count what you are paid, hand it out, take some of it back and recycle those amounts to create the illusion of government money. Ever heard of a non-job?

What you do may be important, you doctors and nurses and bin men and bus drivers, but never forget that all of you are paid by those some of you would drive away by your sheer avarice. Yes, that. Oh, it’s not you personally, you all believe you are doing god’s work, but that’s only because, like the party that feeds you by picking somebody else’s pockets, it serves you to believe that those who are not on the national payroll are its enemies and not its benefactors. So what if the wealth they pay tax on is inherited? So what if they happily fall into the family business; it’s none of your business, that’s for sure. The NHS, the government, welfare, defence, education, law enforcement, roads and railways are ultimately paid for not by you and your taxes but by the hated 'them' and their taxes. 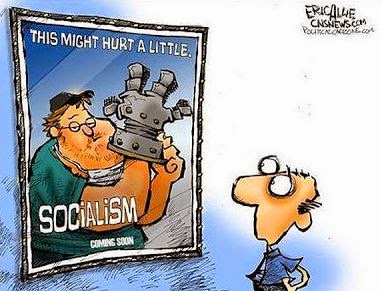 It's because they care...

When the money finally does run out and the crumbling façade of the Labour experiment is peeled away there will behind it be an ancient barn door on which the altered legend will still be visible: "From each according to his vulnerability, to each according to his ngreeds!
Posted by Batsby at 05:17