Vince Cable has written a thriller, apparently... two can play at that game:


Agent Cable tensed. He was in a dark place and no help was at hand. He considered his options; call for assistance, or keep clenching and trust in his sturdy tena. Being licensed to kill was one thing; focussing on the target was entirely another. He adjusted his varifocals, turned up the volume on his hearing aid and concentrated once again on the mission. Only, he realised, he’d forgotten, again, what his mission was.

What seemed like only moments later, he was gently shaken awake. “Sir, it’s time.” Vince was helped to his feet by the two carers and his blanket was gently folded to await his return. A cup of lukewarm cocoa was thrust into his hand and he took a sip. As the sugar took effect his blood surged; he felt invigorated and set out to meet his fate. The Liberal Democrats needed him; he alone could unit them.

Waiting briefly in the wings, agent Cable contained his nervousness; only the merest twitch and tremble of his hands betrayed any frailty. Here he was, the conference keynote speech and the fate of the whole party lay in his veiny hands. Dismissing his nurses he squared his shoulders, put away his notes and strode out, to tumultuous applause, to take up his position at the lectern. 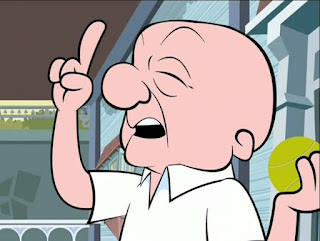 Lend me your ears... mine are fucked

The spotlights captured him in their harsh glare. He held up his hand and the thunderous hand-clapping died to an expectant silence; only the occasional cough and rustle of papers could be heard. He gazed out at the crowd, shielding his eyes against the light. Then he purposefully cleared his throat and leaned in to the microphone. He paused for one meaningful moment then declared “Have you seen my slippers?”
Posted by Batsby at 14:58