I was never a fan of Project Johnson, but the bungling, wild-haired buffoon appears now to have set out a ten-point plan to bring down his own government. Ed Miliband signed us up to some sort of nonsense years ago when he was something or other (who remembers?) in Brown’s cabinet but, not to be outdone, Boris has abandoned an already perfectly unachievable environmental target for one so ludicrous, that maybe the Lizard Overlord theories aren’t entirely unfounded. This is a plan of which Baldrick himself would be proud.

The last Labour government signed us up to cut greenhouse gas emissions by 80% by 2050. The Cameroons then arbitrarily rolled up their sleeves and said, right, we’ll do 100% by 2040 and now Johnson’s girlfriend has thought, fuck it, if we’re promising the impossible then why not go all in? If Michael Foot’s 1983 manifesto was the longest suicide note in history perhaps the current Tory aims comprise one of the shortest? A shame they couldn’t have got it down to three words; then it would be like all their other policies.

Yesterday the PM’s comedy machine put out the ten-point plan summarised below. 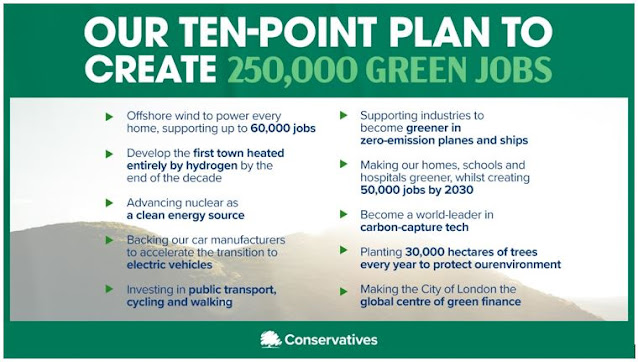 Let’s look at them, briefly, in turn:

·       Offshore wind to be the only source of electricity for every home, thus ensuring for many homes that no electricity is provided at all. But the good news is that 60,000 consultancy jobs will be created… in London. Green Job is, of course, shorthand for “overpaid unaccountable ‘expert’ with zero credentials, sucking on the public teat.”

·       Develop the first town to go up in a fireball by 2030. Hydrogen I the answer, they all clamour, give us hydrogen! Tell that to the passengers of the Hindenberg.

·       Keep pretending to advance nuclear energy, but also keep on delaying funding, thus ensuring that we end up with too little, too late, too costly, and to the disapproval and existential alarm of many citizens.

·       Doing his level best to wreck the personal transport dream which lifted millions out poverty and gave opportunities to the masses, the unseemly dash for all-electric will land many in debt and net negative incomes.

·       But it’s okay because they can always walk or cycle to the wind-turbine blade factory on the edge of their sink estates. Has nobody noticed the weather for much of the year? Or that despite half a century of complaining about it, public transport has become more unreliable and less and less safe? No matter, get on those cattle trucks, plebs.

·       Supporting greener industries is just a soundbite – the government wouldn’t recognise a green initiative if it smashed them in the face and once again, why will nobody admit that there is no such thing as ‘zero emissions’, unless you simply ignore all the emissions? (In some areas, electricity production is already more polluting than modern diesel engines, mile for mile, so electric actually has higher emissions than your small runaround.)

·       Carbon capture is, of course, another one of those ways of brushing reality under the carpet and as for planting all those trees, has anybody noticed how the nation serially fails to meet ANY of its tree planting targets by a country mile? Of course, here we have learned well from the EU and the solution to a failed target is to declare another, more ambitious target, you know, just like a straw-clutching candidate on The Apprentice presenting a bunch of vague wishes as a supposed business plan.

·       And as for the Green Finance ambition, at least here we finally an achievable aim. If you want money laundered, because this is what this ultimately means, what better place than the home of corruption and government itself? You don't believe me? Ask the Russians.