Race to the Bottom

It might not be apparent – I go to great lengths to disguise it – but my political sympathies lie to the right of centre. That used to mean that I was broadly in favour of the general views of most British tax-payers (whether they understood it or not, the majority of British people were natural Conservatives). Nowadays it makes me a frothing loon, hell-bent on bringing back slavery, feudal tenure and systematic racist, sexist and sectist discrimination.

So frenziedly has the centre ground been fought over that successive governments have managed to shuffle sufficiently far to the left that it no longer resembles a fair, British government after all. The left wing’s propaganda war to create the brand “Nasty Tory” has successfully left the Conservatives with no mandate to speak up for the ordinary citizens it truly wants to represent.

So, it falls to Frank Field [link] to voice a concern that has been obvious to all who suffer the deprivations of living under the sinister social experiment of multi-culturalism.

Migrants to a country go for a number of reasons. The first and foremost is usually to make a quick buck – Brits have worked as ex-pats for years to build up nest-eggs, supplying expertise lacking in the host country – then returning home because, well, it’s usually been a better option. That type of ex-pat usually lives in a working, mono-cultural ghetto, taking care not to intrude, or offend and is there on a strict contractual basis, leaving behind only what was paid for.

Those who emigrate permanently tend to want to integrate, learning the host language and generally doing their best to fit in. Taking, taking and taking more would be frowned on; it’s not very British, after all, is it? While trying to fit in we’d stick out like sore thumbs; queuing would be a big clue. Brits tend to avoid mass gatherings of Brits abroad because when it happens it gets ugly quickly – football fans and the Costas spring immediately to mind. In numbers, normally reticent Brits become invading armies and we’ve spent the last forty years apologising for all that.

So, if the true immigration picture was what the last government wanted us to believe, we would see the occasional oddly-dressed (to our eyes) ‘exotic’ alongside the others doing their best to blend in. But that’s not what we see at all, those of us with eyes. Schools bent-backed under the weight of coping with dozens of languages, whole estates teeming with an apparent attempt to out-breed the natives and a broad rejection of our native formalities, customs and dress.

In-your-face immigration is an invasion by another name and whole towns have been overwhelmed by a blind refusal to accept the evidence. To all intents and purposes Bradford has been a Muslim city for years. Now, with Ayatollah Galloway, it’s official. And the sinister Ken Livingstone appears to say he wants the same thing for London. 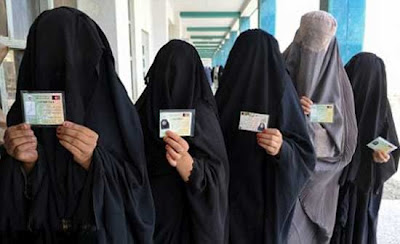 Miss Haringey finalists 2012
There’s only so much natural British tolerance and decency to go around and successive governments have done their best to stretch it to its limits. Even our nastier crime is now run by foreigners, Britons lacking the stomach for some of the more extreme practices. We can continue to look the other way, but surely there has to come a time when somebody, somewhere resurrects the words of a certain politician in 1968. “As I look ahead, I am filled with foreboding. Like the Roman, I seem to see the River Tiber foaming with much blood.”
Posted by Batsby at 07:27