Does my country look big in this?

So, I didn’t blog yesterday; I have much ground to cover, hence today’s is a bit of a collective rant.

Over the weekend, @PlasticAussie posted on Twitter, this link about ‘Ping Pong Poms’ in which the narrow-mindedness of Western Australians is criticised. "A cat stuck up a tree or an out-of-control house party is more likely to get a run on the 7pm news than the Syrian uprising or the economic crisis that the rest of the world is facing …" Well, I’m sorry love, but isn't that just an example of a certain sense of proportion?

Australia has never really entertained the notion of itself as a major player on the world stage - maybe it's time we reined in our own ambitions? Big isn’t always beautiful as many large organisations have come to find out. In staging the biggest sporting competition on Earth we are not only thrusting ourselves once more into the international limelight but risking exposing our credibility – or lack of it - to the scrutiny of the whole planet.

G4S is the biggest security company in the world, but as with all large organisations, they have a charge sheet of incompetence that stretches back years. The widely reported G4S Olympic security fiasco is simply the latest in a predictable series of blunders that naturally arise whenever the human numbers get big.

The NHS is another behemoth whose very size mitigates against its competence. Size matters. The more people involved in anything, the greater the odds of catastrophe. And in our current big-state nightmare incompetence is practically a watchword for anything the government – any government – lays its hands on. Such as the utterly inept twenty-four-year accounting cul-de-sac that is the DWP.


The unforgiveable rise in our population during the last government’s tenure is yet another example: The article states one reason as “robust fertility levels” Oh yes, robust amongst whom? Among the hard-working middle classes that carefully cost out their decisions and pay for all the others? I rather think not. Ironically, nowhere is fertility more ‘robust’ than in the sector of the population we fear the most and are most directly responsible for the sheer size of the Olympic security operation in the first place.

Oh yes, it all fits. In the ridiculous pursuit of universal individual liberty and happiness, we have lost control of our borders, our population and our culture. And with it, our old place in the wider world. We have pandered to the absurd notion that given freedom, humans can be trusted to behave responsibly and make good choices. We have embraced a big is beautiful ethos that finds its absurd apotheosis in this story, which frankly, is a whole load of arse. 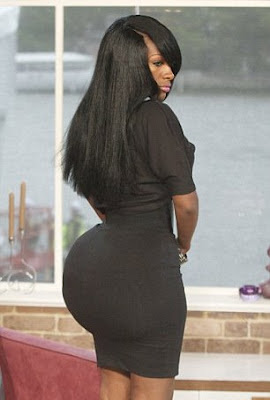 Does my enormous arse look big in this?

See? That's what letting people make decisions leads to. Do we want our country to look like the biggest arse on the globe? It strikes me that striving for a bit less freedom and happiness in the world would go a long way to sorting out the trouble.
Posted by Batsby at 11:46