So, the big topic of the weekend has been Shiny Dave and William Vague's slightly contradictory stances regarding the only 'ref' anybody is interested in. Forget Euro 2012, it's Euro-ad-infinitum we're concerned about. Both main parties have arrived at the same mealy-mouthed formula, which goes roughly thus.

The time is not right. We will open discussions on the desirability of holding a referendum on our role in Europe when it becomes clearer what The EU will become. At that time we may entertain the possibility that we might need to renegotiate our terms of membership.

That means precisely sweet FA (<~~ see how I got another footie reference in? Genius, that!) In other words we are too bat-shit scared of making any decision at all and we will continue to throw your money at the European confidence trick until war breaks out, populations starve or... or... or what? Nobody knows. Nobody.

Labour are sitting pretty , jabbing from the sidelines while breathing an enormous sigh of relief that they didn't get into power in 2010. But it is a criminal shame that none of the main parties dare entertain the notion of democracy.

It is an entirely reasonable thing to choose your battles and your battleground wisely and not enter into open conflict until intelligence suggests you have a chance of winning. But the Conservatives have been ripping themselves apart over Europe ever since the failed attempt to rid us of it in 1975. In the twenty-teens it will be the issue that finally killed off the Tories. And if they are so weak, then good riddance.

The EU will never let us renegotiate - would the golf club tear up the rules in our favour and then let  us take the prime tee times for an associate member's fee? Of course not. There are only two paths for the European project now. A federal  Europe of soviet-style gulags, working for the massive machinery of state in return for a meagre standard of living and a media diet of joyous fake news. That, or a break up into self-determining sovereign nations. 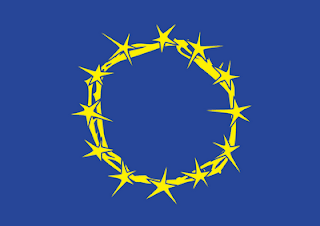 So back to the referendum:

I'm not one to put my signature to causes, but on this occasion I believe something has to be done. Maybe (just maybe) enough names on this PETITION and something might happen. Unless the current government do this and do it now, there is only one party with the balls to offer us the choice.

So, Cameron, hold a referendum NOW or I'm definitely voting UKIP and I don't even care if Labour get back in as a result, you cringing, Euro-servile coward.
Posted by Batsby at 06:19