What a waste of time!

I used to have some semblance of a life; get up, go to work, come home, draft a blog, eat, watch telly and go to bed. But all that's gone now. Now, I have to feed the Twitter monster, a task which was once straightforward and fun and got multi-tasked along with the blog writing.

But now I am assailed by a monster which cannot be slain. Well, there's always the OFF button I suppose, but that's the coward's way out.

This afternoon I listened, mouth agape, as James Whale baited and goaded and pleaded and - damn it all! - asked politely for a Liberal Democrat - any Liberal Democrat - to call in and defend the proposal by Simon Hughes that parts of London be rendered off-limits to foreign property buyers.

Between 4pm and 5pm James continually invited supporters of the policy, beginning the hour-long search with the question, "What is the point of the Lib Dems?" and was met with a wall of silence. Not one. Not one, single, solitary, Liberal Democrat supporter disturbed the airways.

Oh I dearly hope Nick Clegg or one of his [hearing] aids was tuned in. The sooner this rag bag party of political illiterates gives up the ghost and pisses off back to their flipped second homes, the better. Leave the field of battle to those who have the ammunition to wage the war.

It was all so different when Ming the merciless was in charge. Wasn't it? 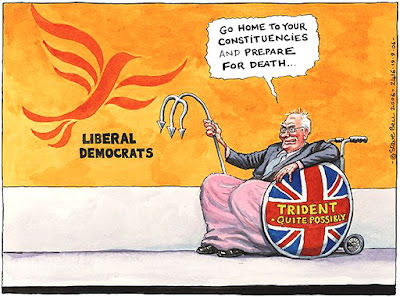 Anyway, I can't be wasting all this time writing searing political commentary now James has moved on to the issue of the end of squatters's rights! Yay, let's grind the filthy hippies into the dirt. Now, shush... I'm listening to the radio - available on FM, DAB or on the Internet: Click here.